The artificial paradise of Francesco D’Isa is pervaded by a cruel and refined eroticism. Like going into a boudoir of tortures, covered by a pastel-coloured wallpaper. A place in which mutilations have to be shown off as something terribly elegant, a proof of a love fetish, a gift for a lover who always wants to have something of the beloved within his reach. To worship it, as it would be the beloved in her wholeness. The missing limbs are wrapped in soft coils, or are cauterized in concentric and pearly signs. 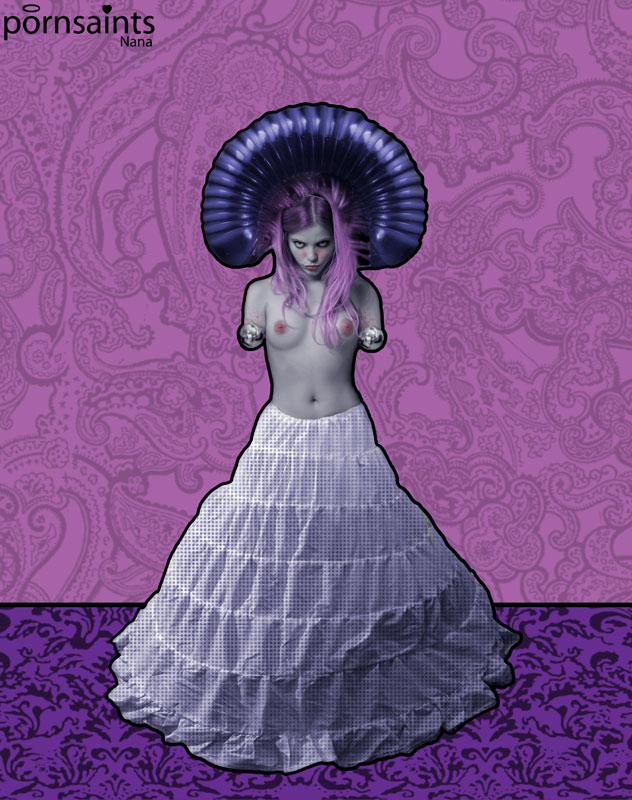 Some slits open up on the throats, on the backs, on the breasts of the models. Openings surrounded by additional lips, to be pushed away with fingers, to be penetrated with black lines, sharp cutting like  spears. 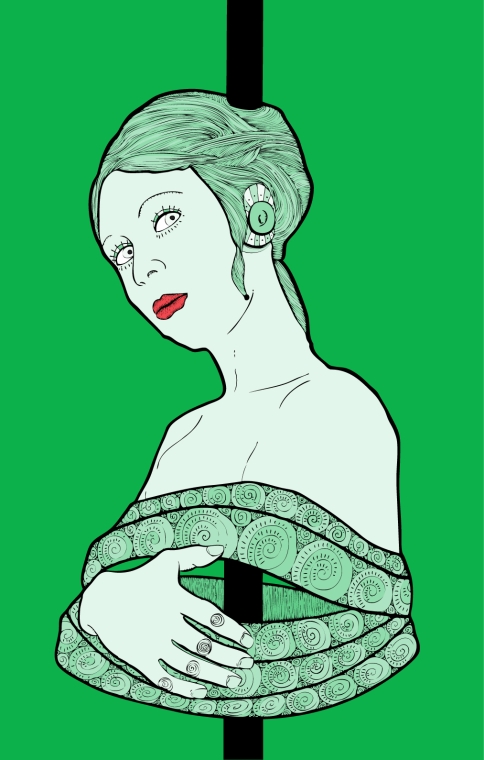 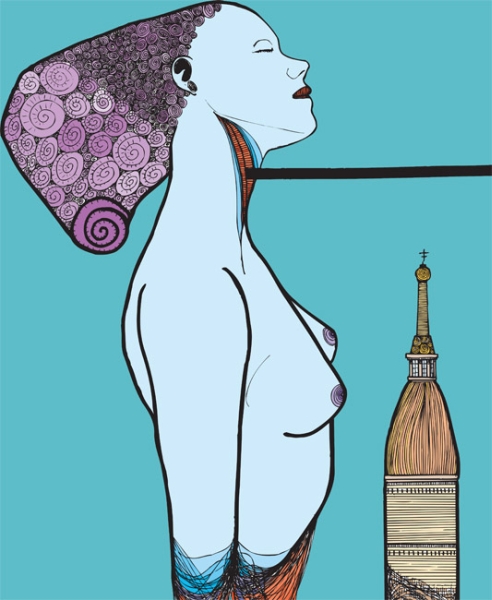 Hair compacts around heads, in Art Nouveau bunch of spirals, in crowns, haloes, and cyber bone-structures. 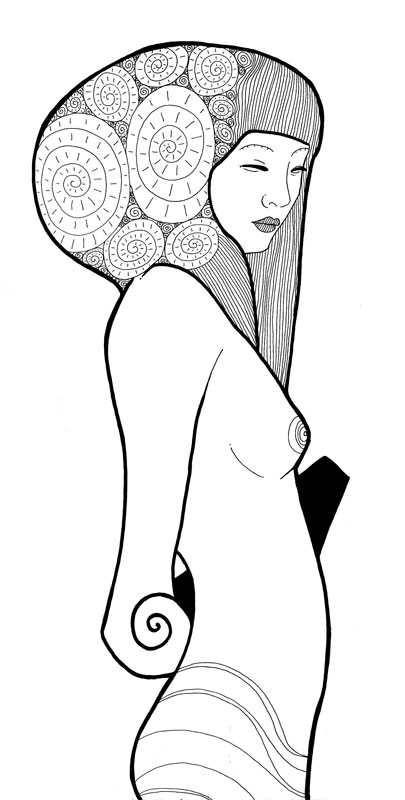 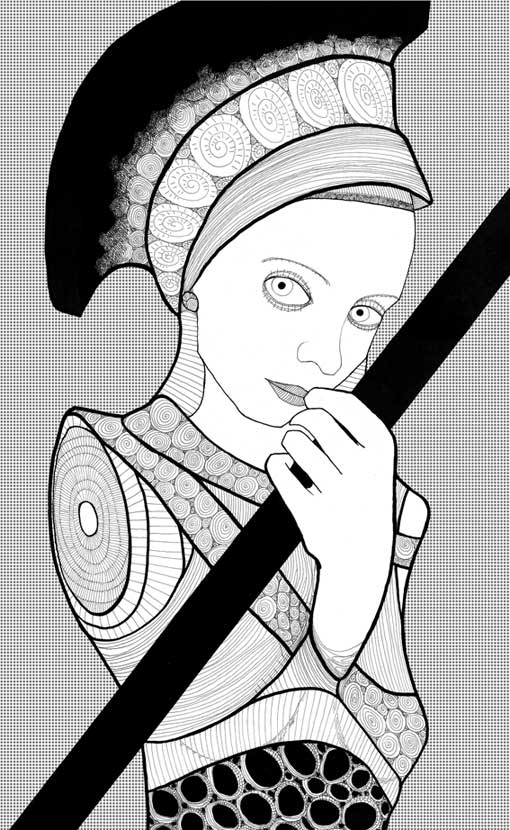 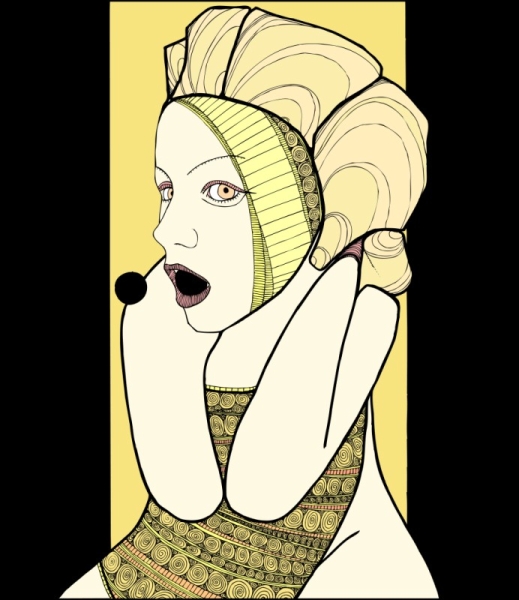 Or maybe they could be the effects of neurofibromatosis, composed in a decorative way. 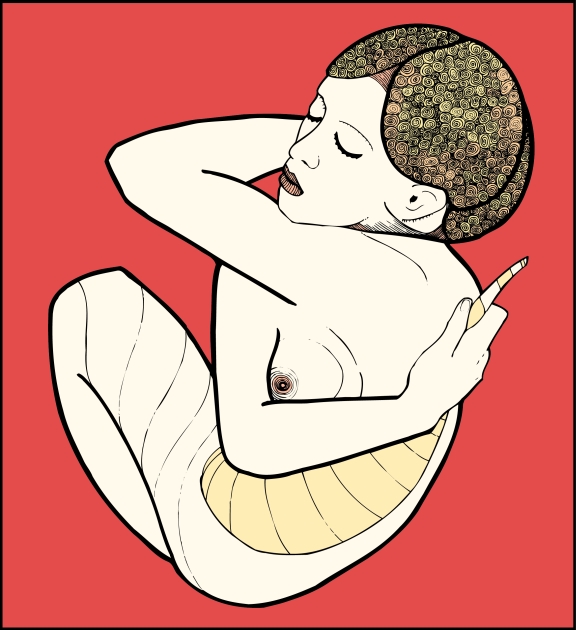 The love for deformity is a pervading love. We can find it in the  vaginal hypertrophy of The She-Raper, and in the Pornsaint  Nya Yu: woman- rhinoceros, a sideshow freak with her circus caravan behind. 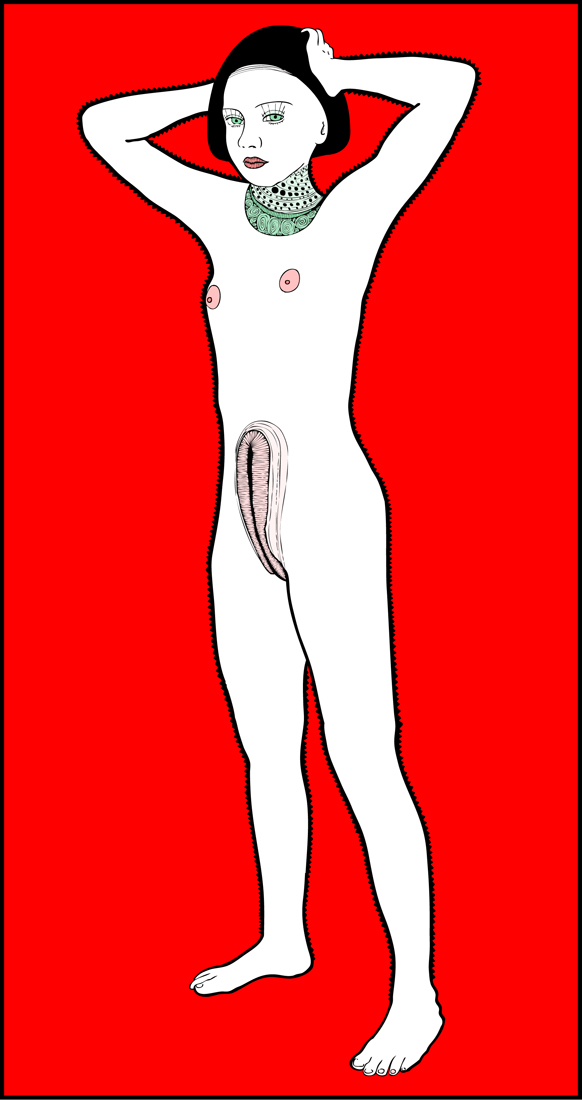 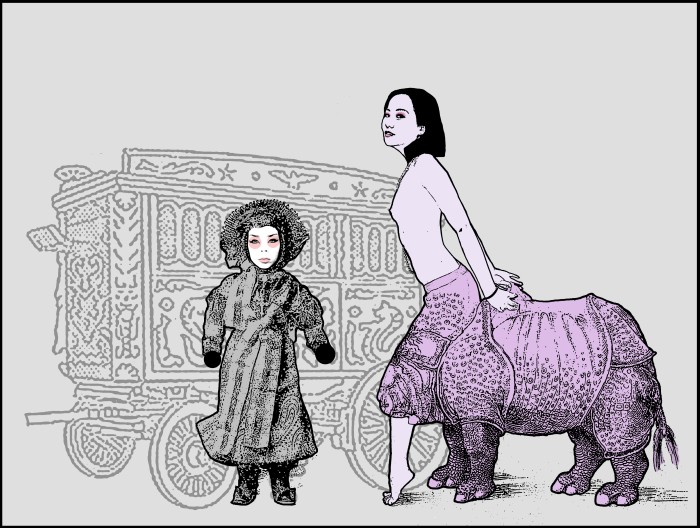 The Pornsaints form a revolutionary pictorial cycle. The sainthood is conferred on them for their extreme sexual life, which is normally considered the excess of sin by self-righteous people. An extreme sexual life,  like the one of prostitutes. But if we blow out – besides the oppositional dichotomy sin/sainthood – also the one which sets against sex and love, we can reform the equation between love and sainthood in the traditional equivalence.  Love-sex as a gift of oneself, it doesn’t matter if eligible for compensation, as often pornai demand. After all, also many Christian saints claim sugar in order to concede their saving grace.And they are certainly less charming than the skinny Madison Young, wrapped in her cilice of black pearls.

Or the smiling Casey Parkey who, with her Sixties style, kneels down to make her devotions.

Or the mutant and statuesque Terri Summers, striped and without arms as Milo’s Venus, but with something more down her spine.

Saint George had to kill the dragon. The divine Anna the Nerd, with black shadows under her eyes, her vertebra corset and her skill to avoid  bullets, tames the dragon and keeps it by her feet as a dog.

Ava Rose often appears in a Victorian palace, in California. Her principal attribute is a secretary’s chair, and her sacred animal is the hen. The bird is functional to dissimulate her real nature, which is scary. We can see this in her eyes. 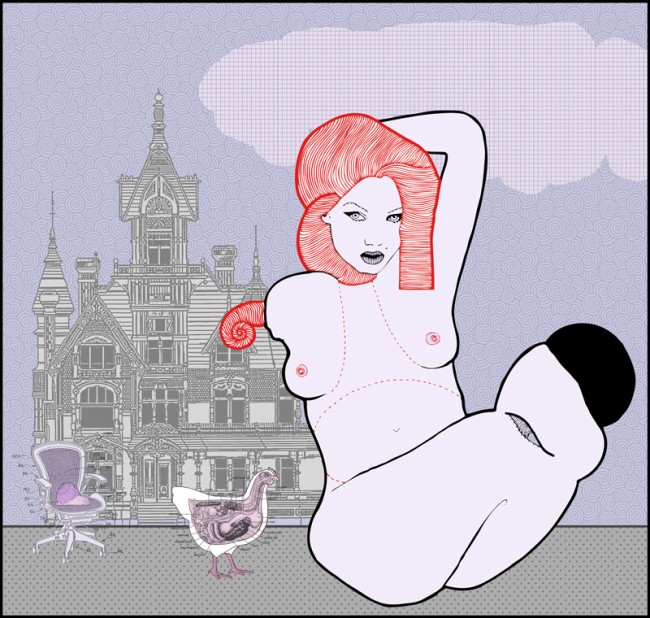 Bella Vendetta wears a latex dress, and she really exists.  In the real world, where she does her best to perform the highest number of obscene acts, together with her pornocratic sisters. In the real world and in the one of ether, in which the reliquaries of her perversions are exhibited, in order to be admired and emulated.

Vanessa Lynn is a lover of bestiality, in which she likes to mirror and recognize herself. 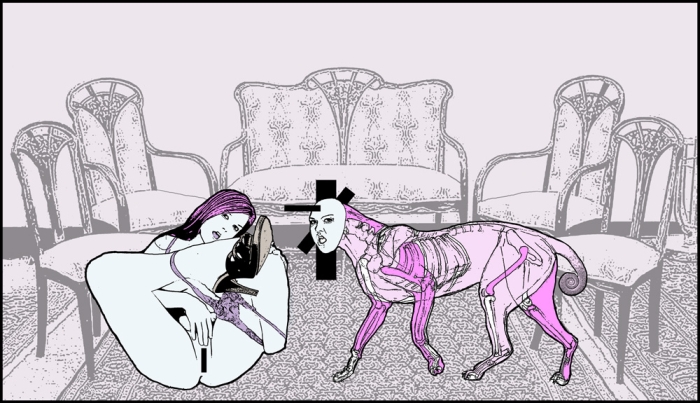 Pornsaint Nana has a long virginal crinoline, but her halo could have some improper uses. 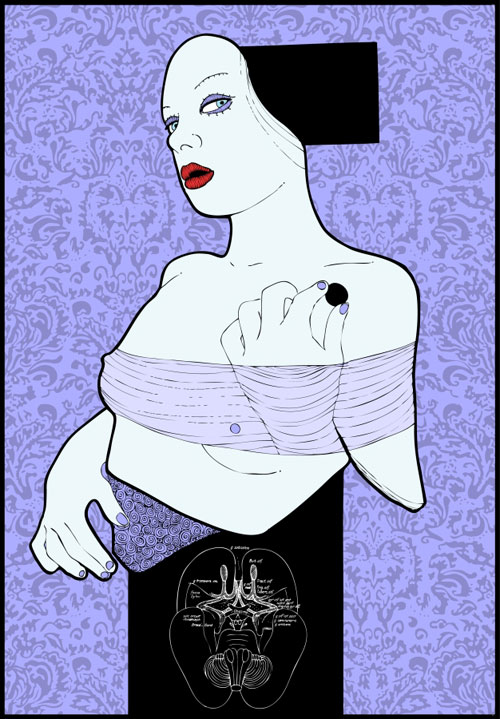 The Pornsaints of Francesco D’isa establish the last species of Ultra-Women, seductive as the fruit of the union between Beardsley’s Salomè and a Louise Bourgeois ‘s mutilated body. 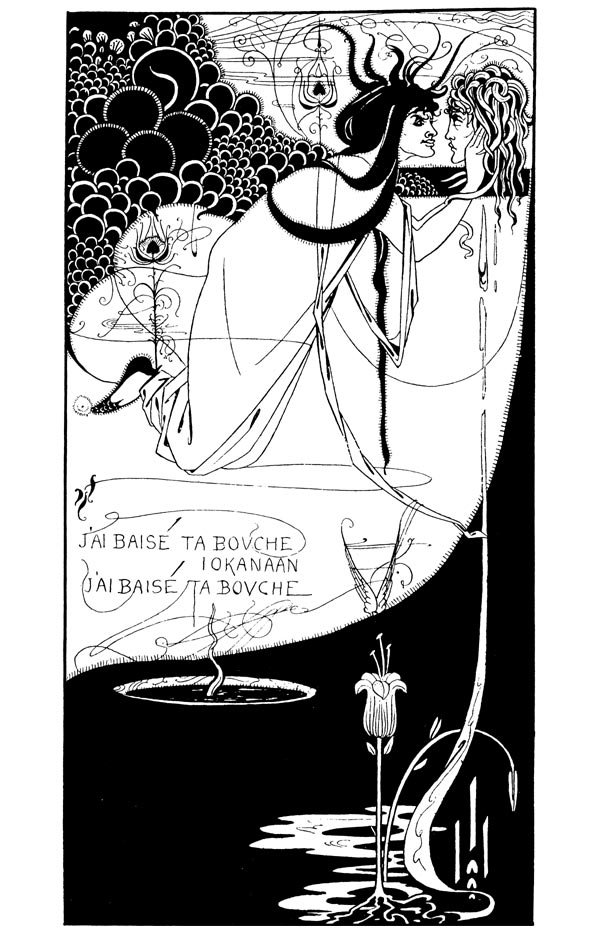 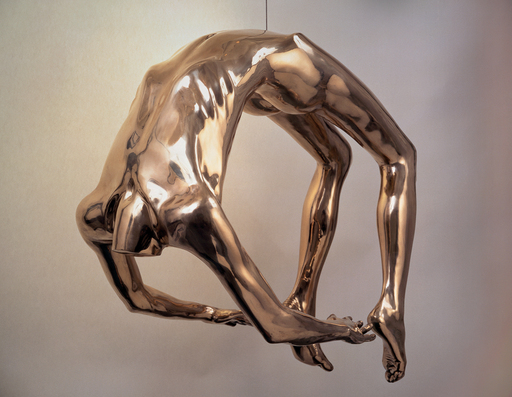