// SPIRAL TRIBE ___ The representation of time through the ages till the symbolic form of the spiral in the artwork of Merz, Calder, Lanfredini, Nauman, Smithson, Dean, Ligorio, Gallard - Kainowska Kainowska

SPIRAL TRIBE ___ The representation of time through the ages till the symbolic form of the spiral in the artwork of Merz, Calder, Lanfredini, Nauman, Smithson, Dean, Ligorio, Gallard 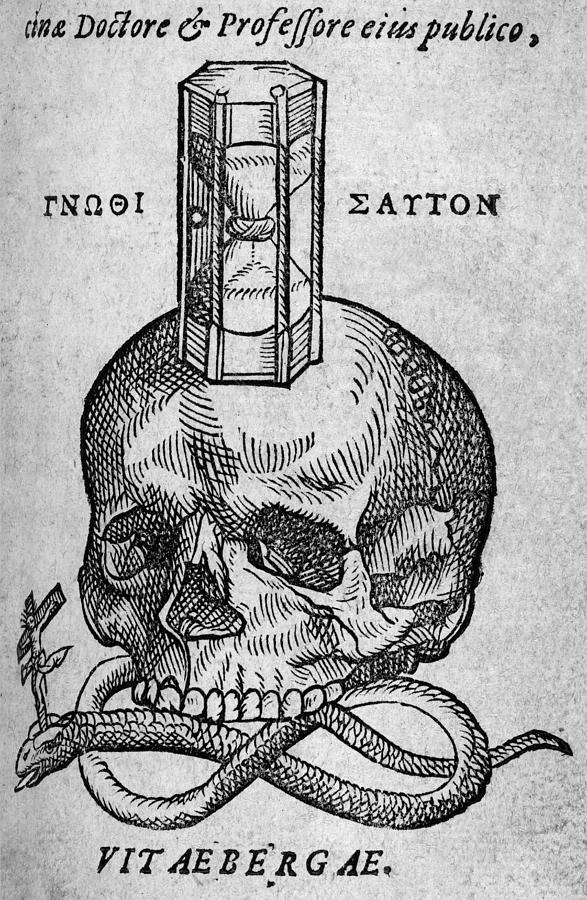 Time changes form. On a perceptual level, with its upsurges and decelerations related to the mood, the frame of mind and the age of man, but not only. Also in its pure symbolic aspect.The self-devouring snake of the beginning, the giant who kills his sons, the deadly baroque hourglass, the persistences of memory of the post-Bergson years: the ways in which man has represented one of the fundamental conditions of his existence have been innumerable. 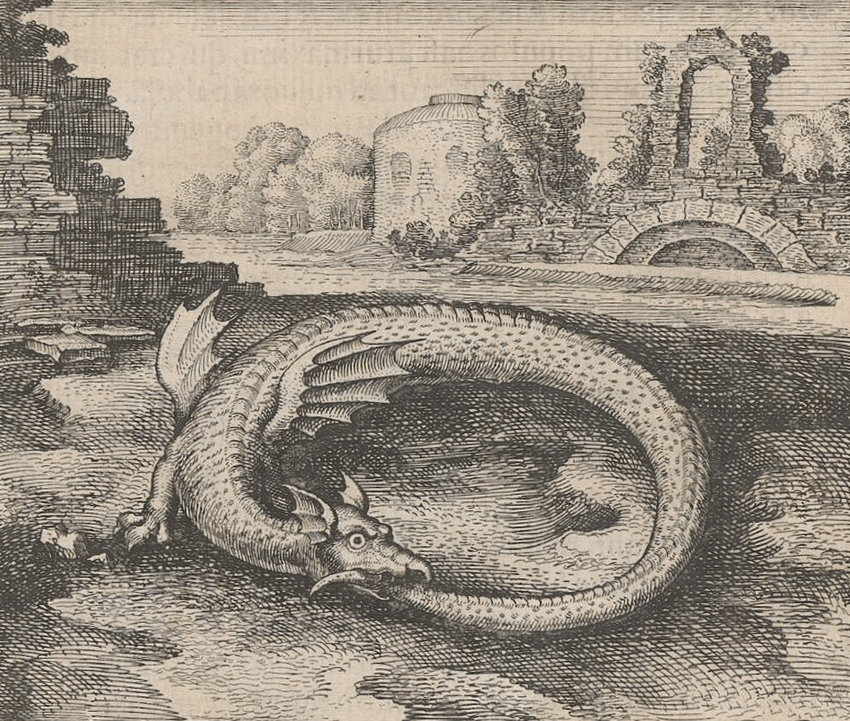 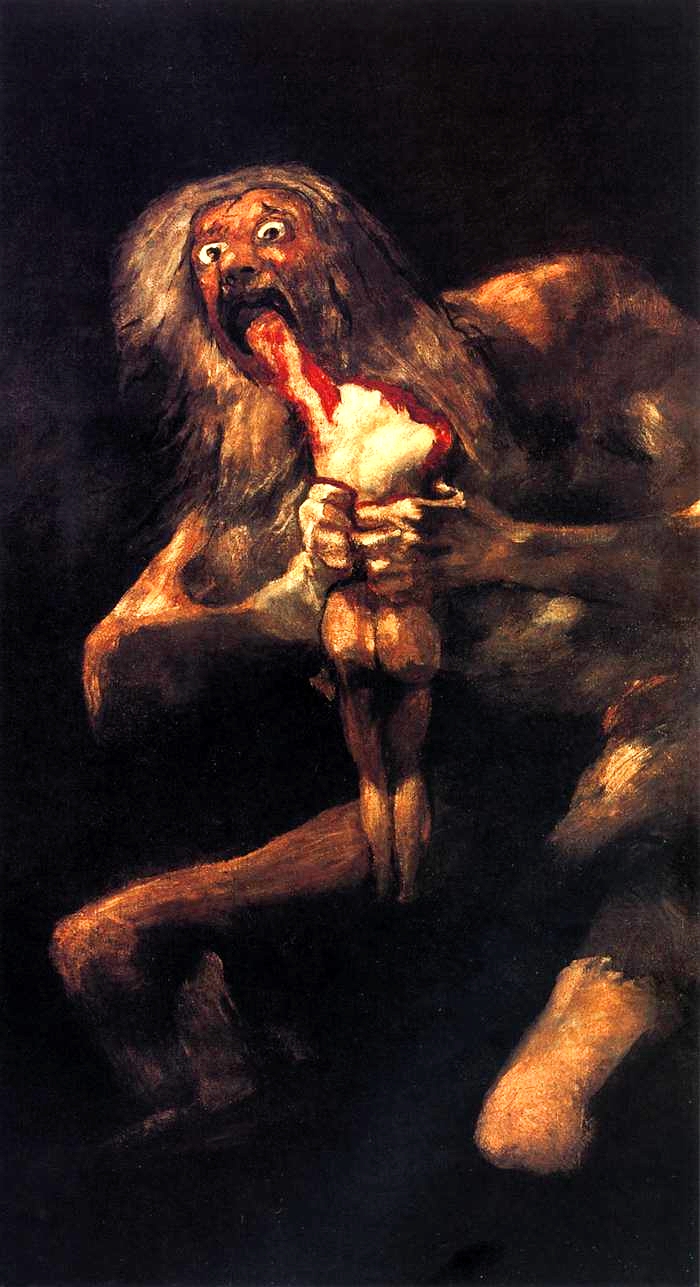 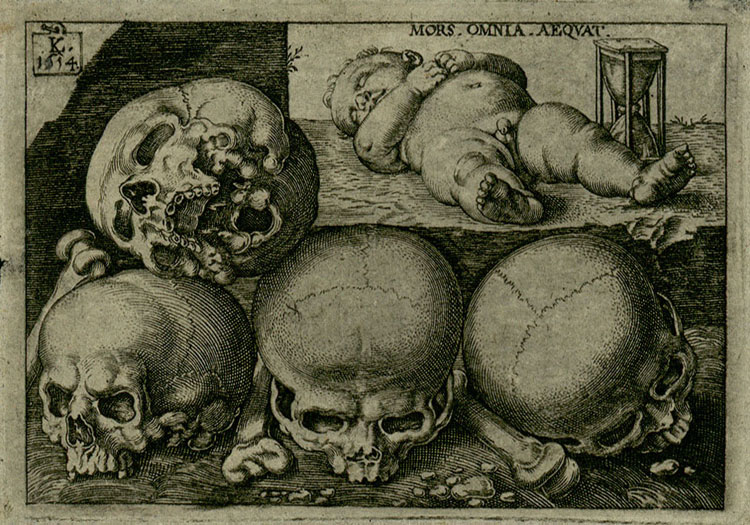 But the figuration of time can be reduced to more essential forms: the more we work by subtraction, the more we get a complex and comprehensive figuration. The circle of the Neolithic societies, linked to the agriculture seasons, the straight line of the Christian civilization and of its positivist prolongation, the time spiral of the (pre-civil or post-modern) tribes are symbols which represent the most subtle facets of periods which gave birth to them.

Due to these all-absorbing features, the spiral has attracted a great number of artists of the Twentieth Century. So many as to make some art critics claim that the spiral is the symbolic form of contemporary art. One of the temple of contemporaneity, the Guggenheim Museum in New York, is structured in a downward spiral. 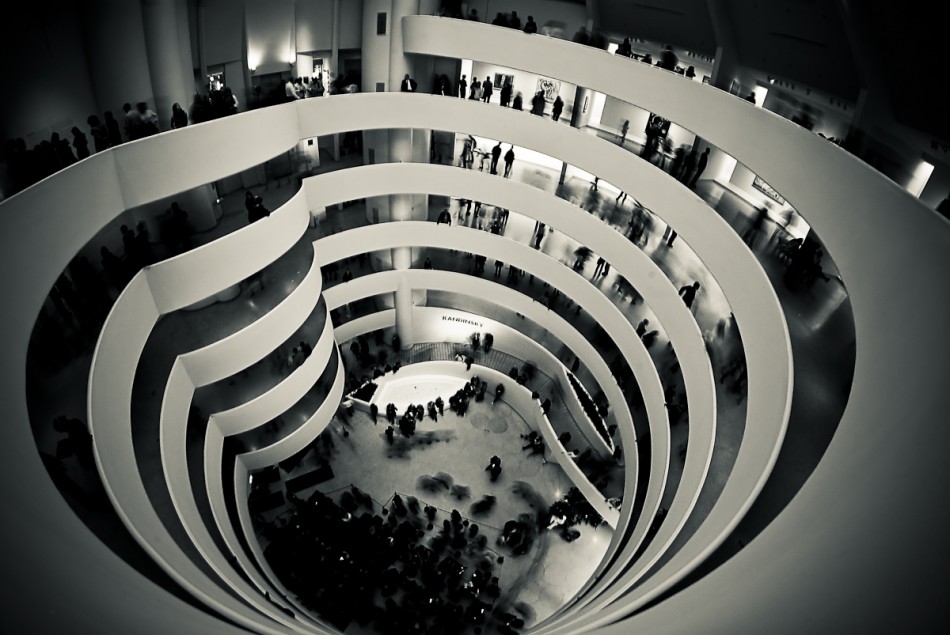 The same sign, scratched on the rocks of the American continent before colonization, has been the synonym for “migrations”, or “wandering tribe”. 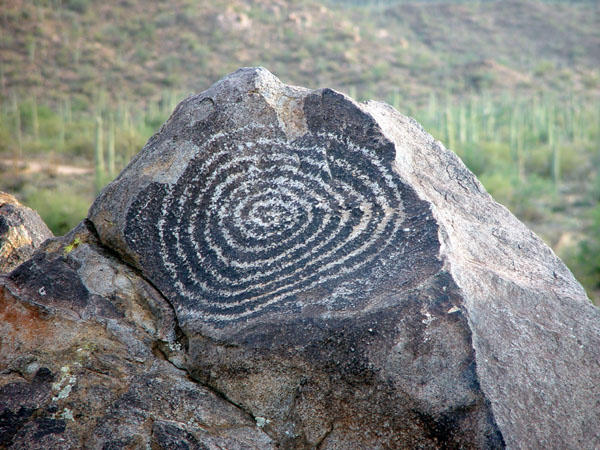 It is not by chance that a Mario Merz’s hyperbolic spiral has been placed at the metro station Vanviteli in Naples, as to reveal the fluid and interconnected nature of mobility in our age.

With the fall of the linear concept of time, the past, the present and the future wrap themselves in concentric circles. Postmodernism – considered since its etymology- is made from a temporal alphabet soup plummeting in an eternal present. In this same field of hybrid time dimensions Calder has made jewels which seem to date back to the Copper Age, and Italo Lanfredini presents again the labyrinth archetype. 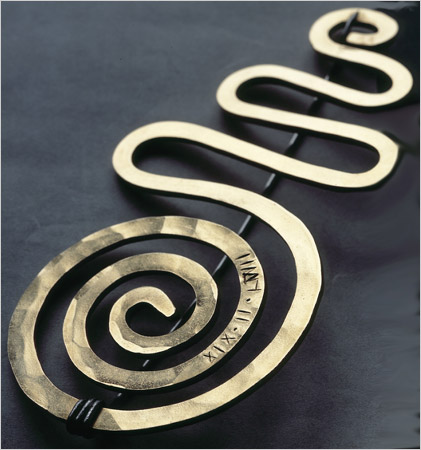 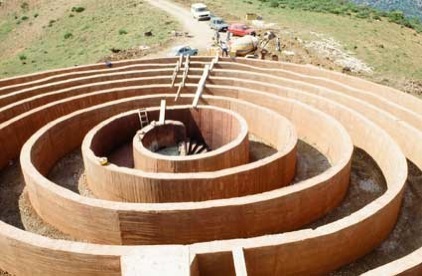 Bruce Nauman uses another neon-made spiral to claim:The true artist helps the world by revealing mystic truths. The spiral, as an electric circuit in which all its parts are immediately interconnecting, tells us about synchronicity, flexibility, different repetition, and about the continuous mutation of our epoch of transition. 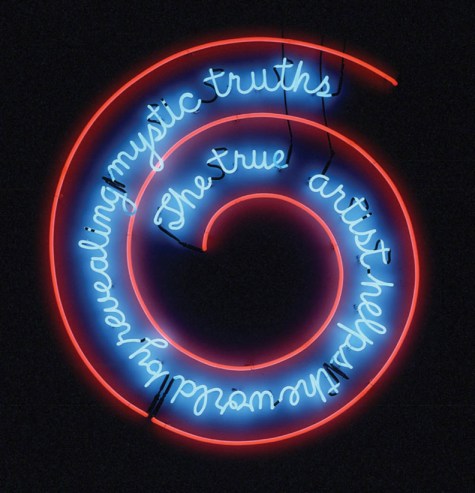 But the most widely known spiral-shaped monument of contemporary art probably remains Spiral Jetty, by Robert Smithson. A true  memorial of time, which goes back on its steps in an eternal circle – structurally identical, but never exactly alike – Spiral Jetty is also an emblem of the becoming of nature. The same force which will fret the artwork, till it will make it disappear. The author himself had the occasion to see his spiral sunk in the depths of the Great Salt Lake, just before dying in a plane accident in 1973. The piece appears and disappears, following non-linear and mysterious patterns. Its ghost shows up sometimes, a ghost made of seaweeds cropping out. Sometimes its shape is altered by salt incrustations. 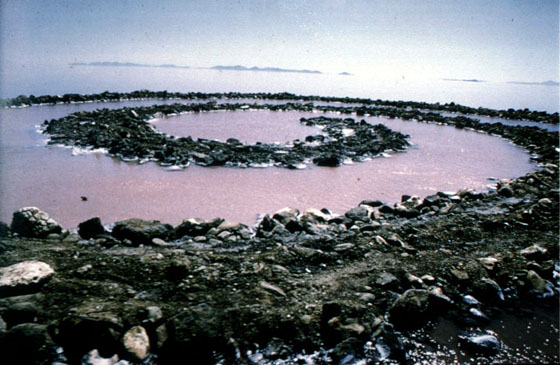 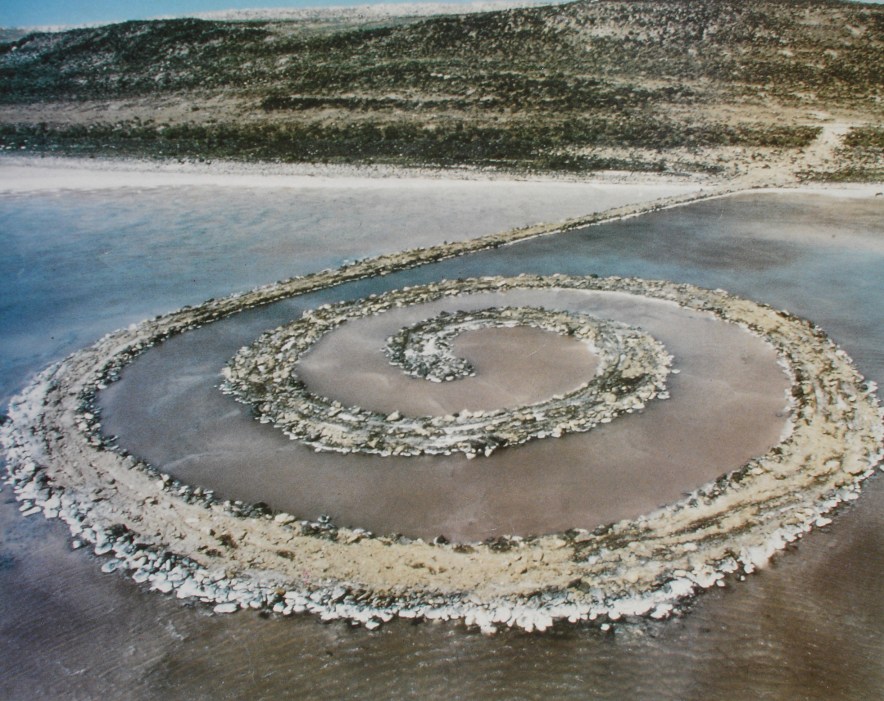 The English artist Tacita Dean undertook a journey to find its traces, twenty-seven years after its construction. But she had neither the certainty of having not found it. The work which Dean drew from this experience is a simple audio-track, the dialogues with a friend who was with her. An Italian artist, Deborah Ligorio, made the same attempt in 2004. A camera, fastened to her car hood, recorded the entire route starting from the airport, across the uncontaminated American landscapes, till the reddish waters of Rozel Point, and the final apparition of the spiral, enamelled by white salt crystals. Finally Cyprien Gallard made a performance in 2008: Spiral Jetty was covered by a cloud of dry ice, as to foreshadow its ultimate crumbling away. Change, destruction and death are only details in the great universal becoming, of which time is the measure. Spiral Jetty keeps pending between a past of existence, a future of passing, and a present in which these two opposites play together. 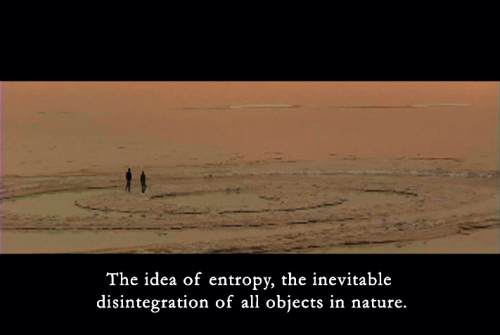 Next post
DOLL PARTS ___ The childhood issue in the film Tydeland and in the artwork of Mark Ryden, Marion Peck, Camille Rose Garcia, Todd Schorr and Ray Caesar