DISNEYLAND UNDER ATTACK ___ The artwork of Max Papeschi 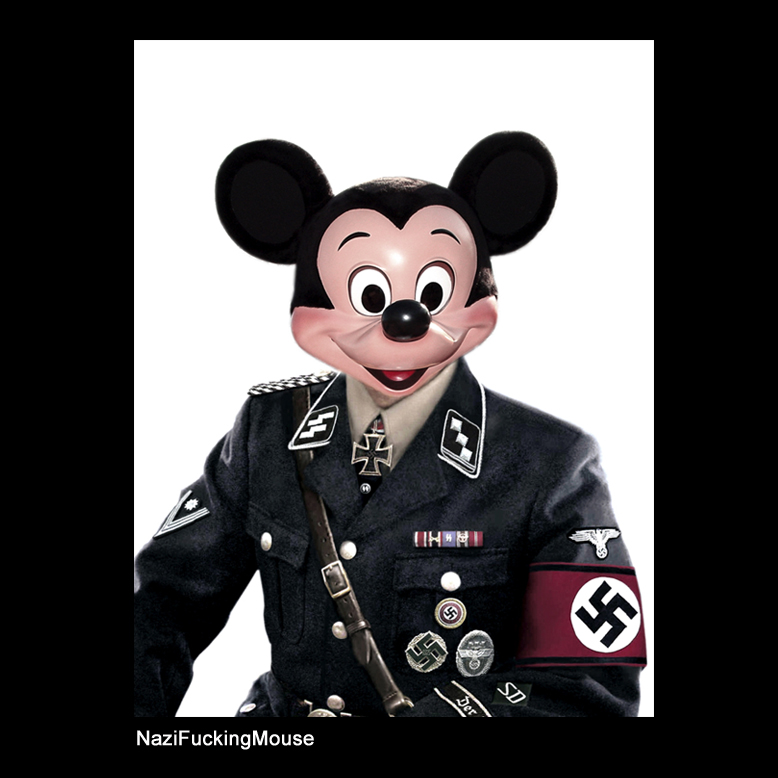 Who’s the leader of the club 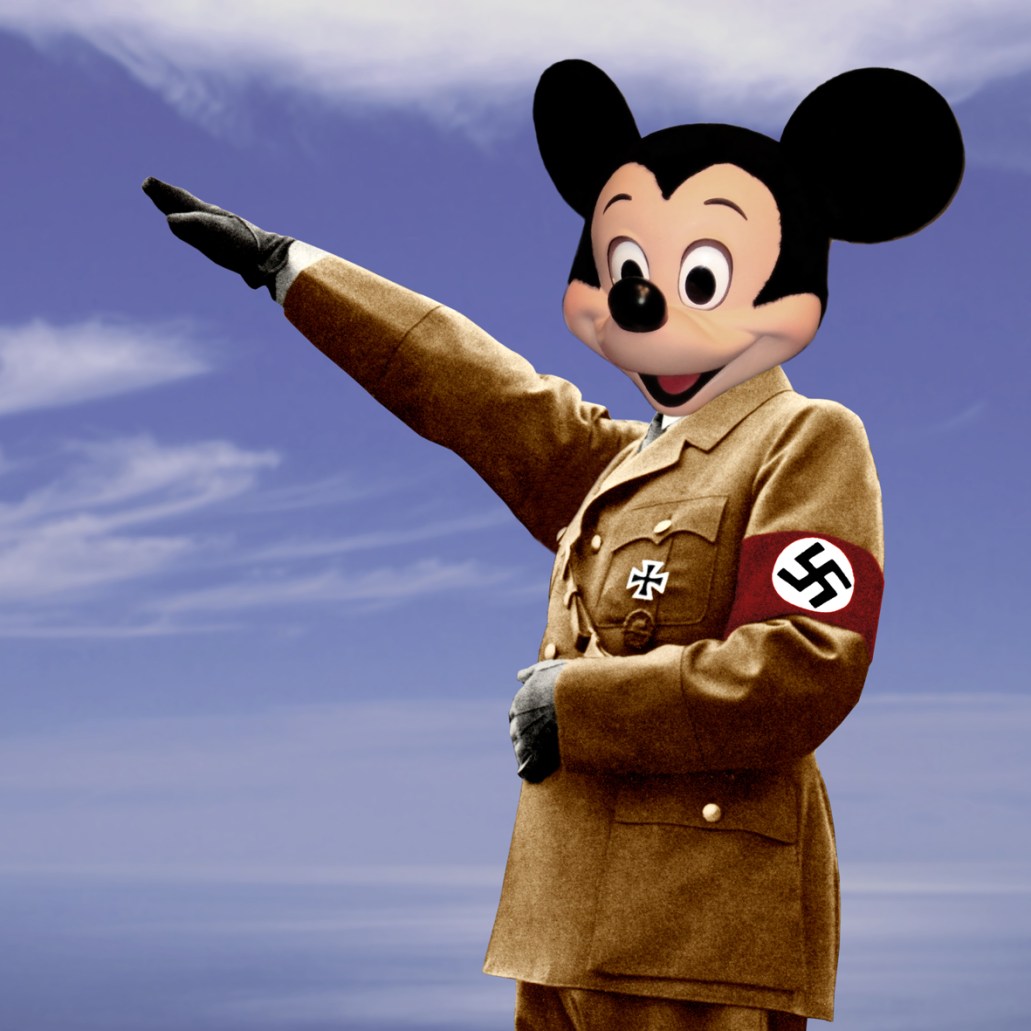 Don’t contaminate the sacred semantic field of childhood with bad things. Show only the heroic,  the humanitarian, the intelligent side of war. Don’t mix sex and power, because power is pure. And when you talk about religion, rinse out your mouth.

This is the litany performed by all the champions of goodness, good taste, good manners, and all the politically correct dogmas.

Fortunately we have another semiotic hooligan who comes to rescue us, showing the forbidden side of war, power, religion, family values and entertainment  industry.  Max Papeschi unleashes a dazed Donald Duck in the Vietnamese jungle, with helicopters from the Ride of the Valkyries and the Guns ‘n’ Roses as back-ground music, to shoot better. 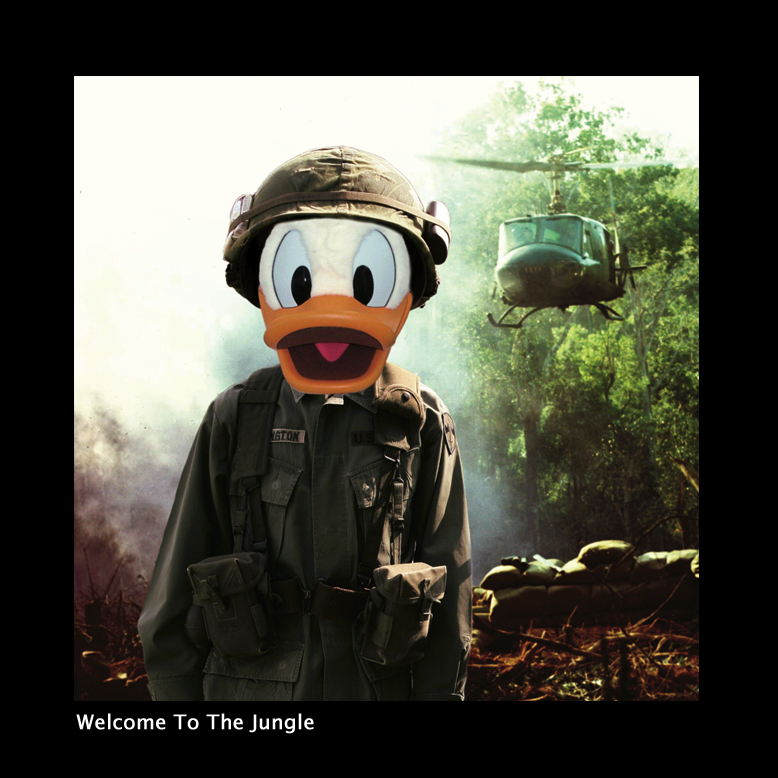 The Mc Donald’s clown, all along too similar to the It’s Penny Wise, has opened a franchising in Auschwitz, using the same techniques of the nazi marketing: work makes free, wherever you can buy a kosher Big Mac. 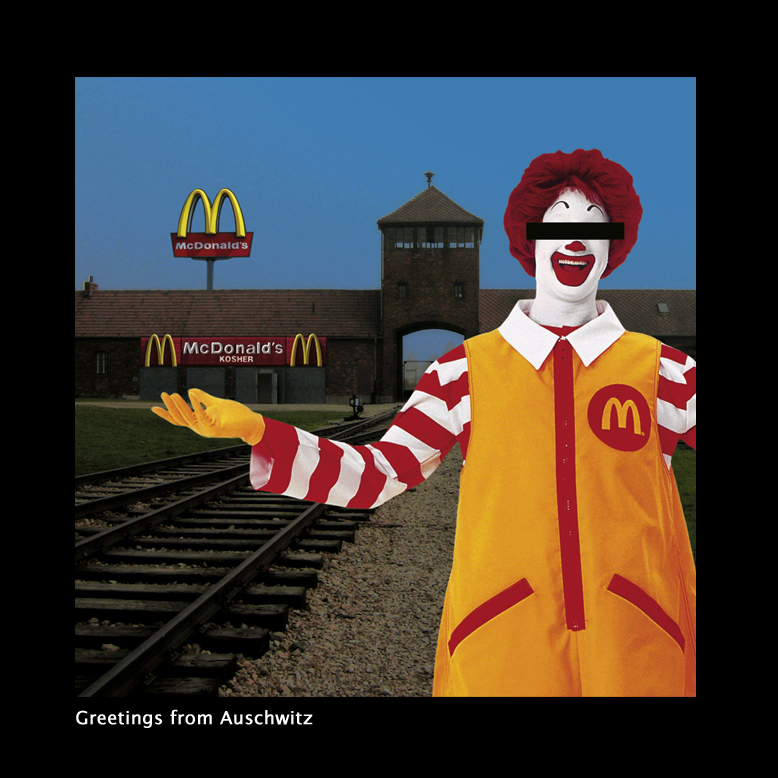 Market is a war, so Ronald McDonald trains himself in Baghdad. He would like to remain undercover, but he is having too much fun to care about it. There is an army of monkeys with him, with their Friendly Fire from Disneyland. How could they kill us? They are our friends, and their bullets love us. 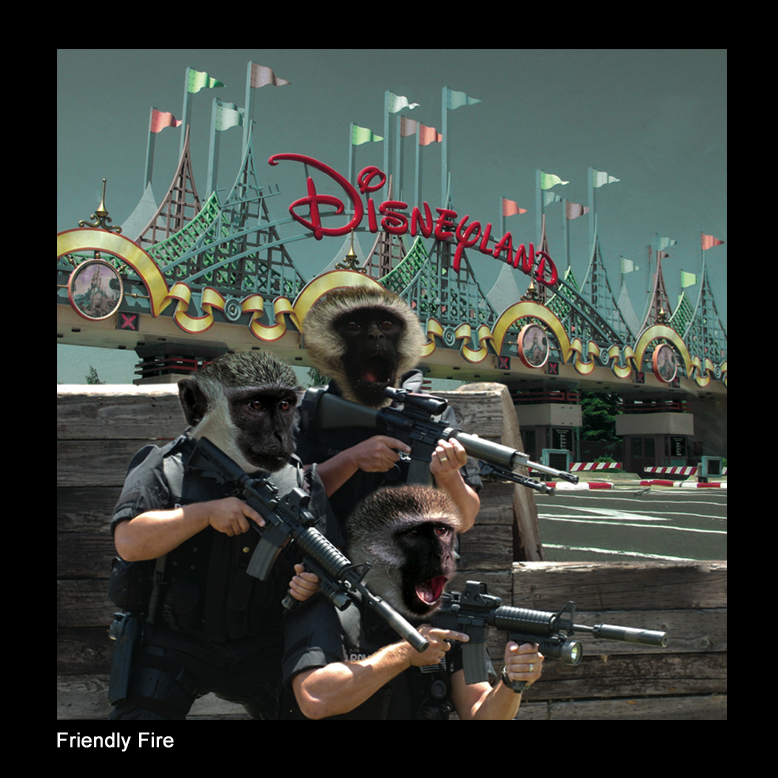 Max Papeschi shows us how the family institution is a clockwork bomb. Kermit and Piggy, just married, stand in front of their house in flames. War of the Roses or too many alcoholic excesses after the ceremony? 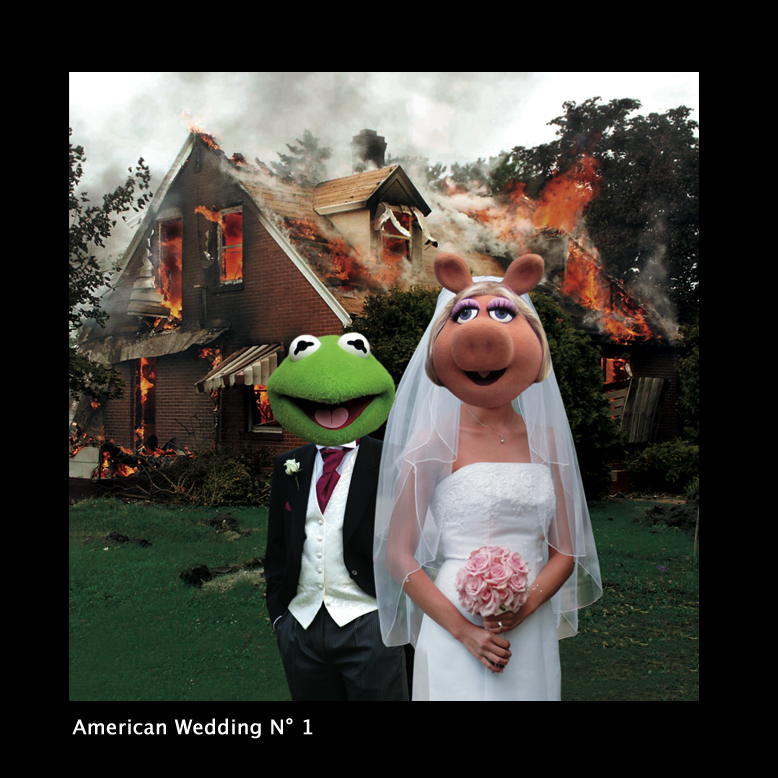 Even the gay-couple Shrek and Donkey could get married in America, with their lurex pants in The Rocky Horror Picture Show style, but neither they are safe from the risk of explosion. 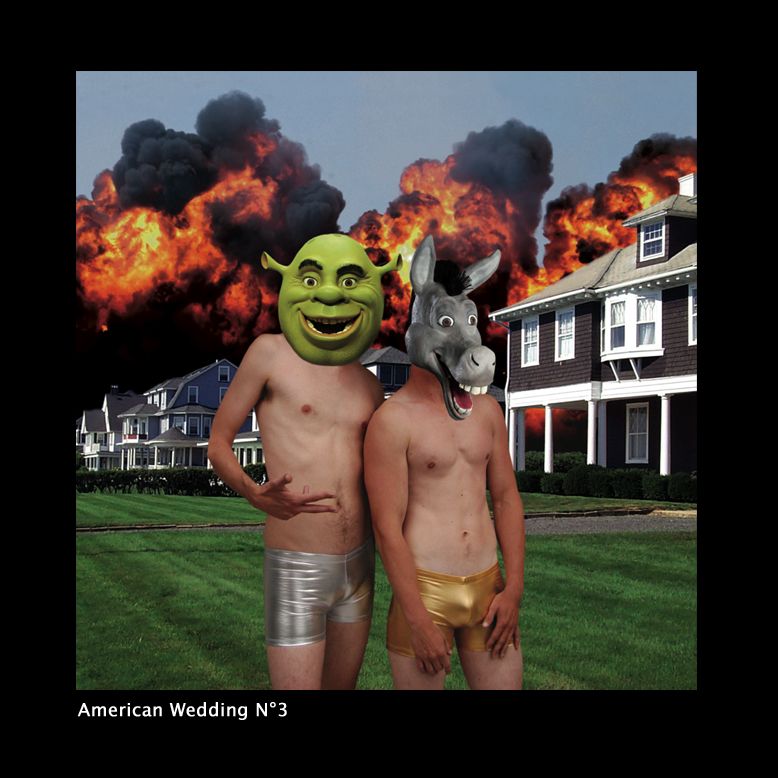 Bart and Lisa hitched up in a incestuous wedlock, and for the honey-moon they have chosen Guantanamo. It’s all fault of Itchy and Scratchy, that violent cartoon Bart and Lisa used to watch at when they were children. 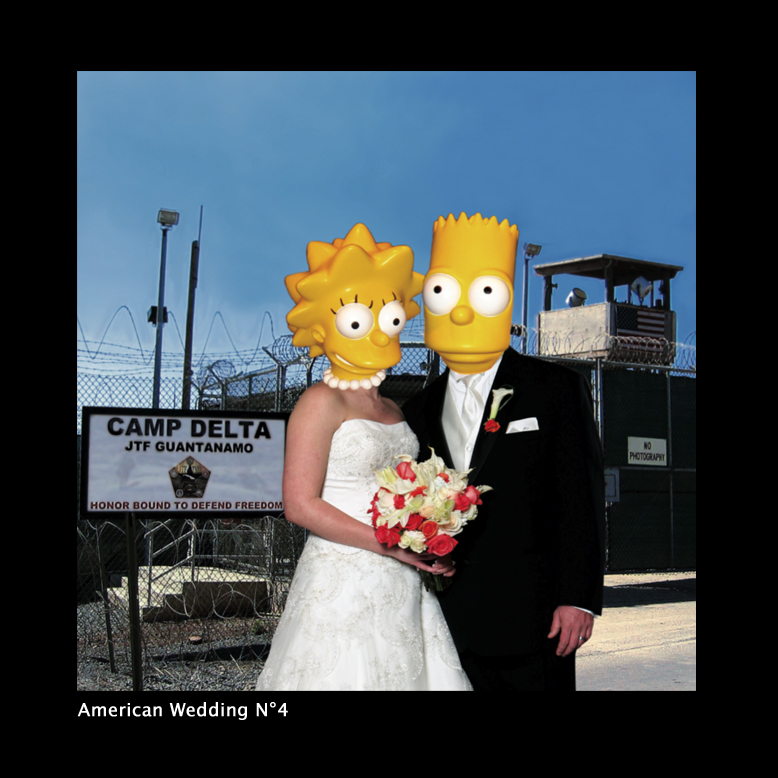 Coca-Cola uses advertising airships to drop firebombs: too much sugar in the diet, too much South-American union organizers disappeared. 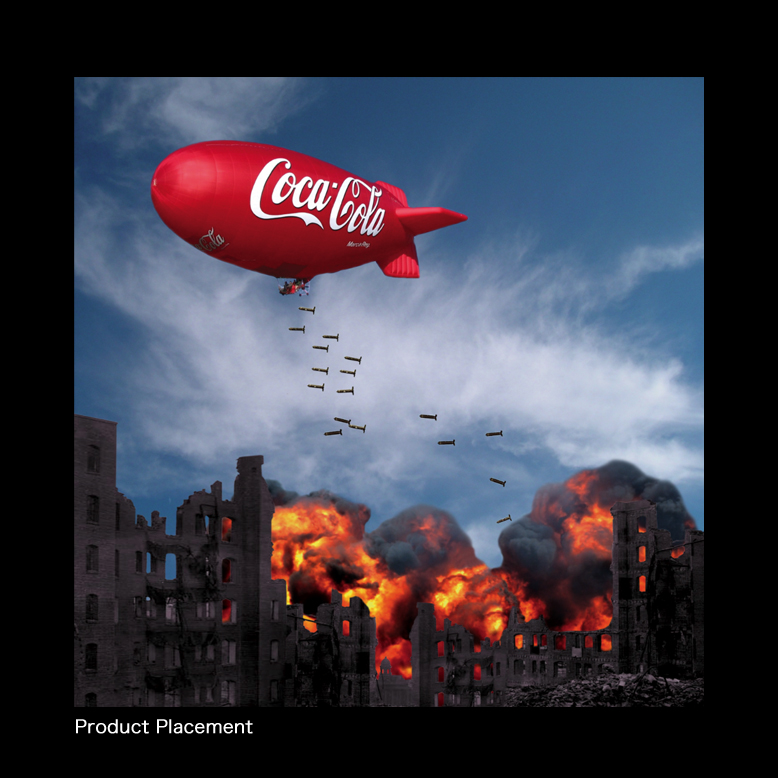 Hello Kitty has ended in a Mexican prison, maybe for exploitation of child labour. 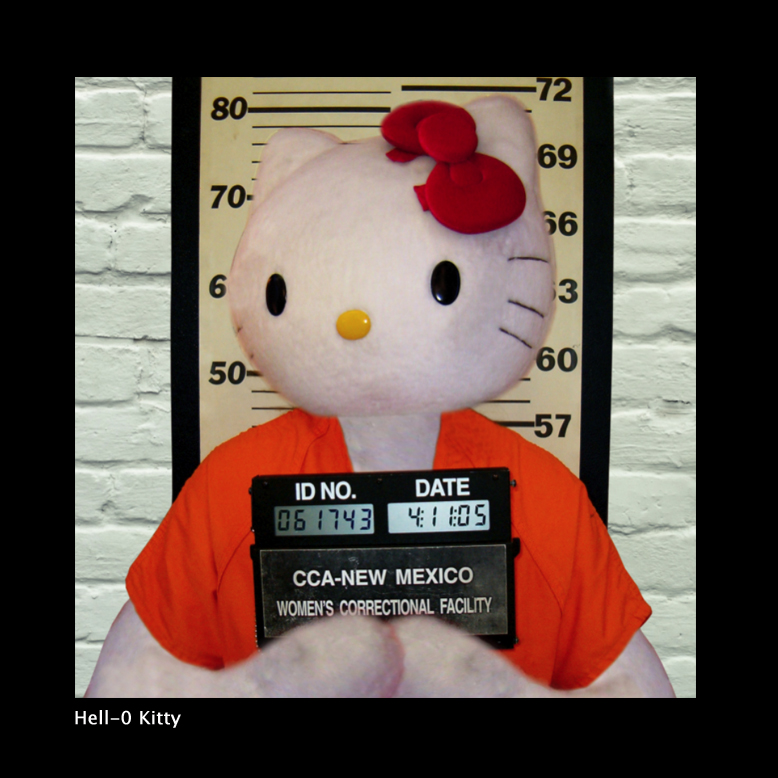 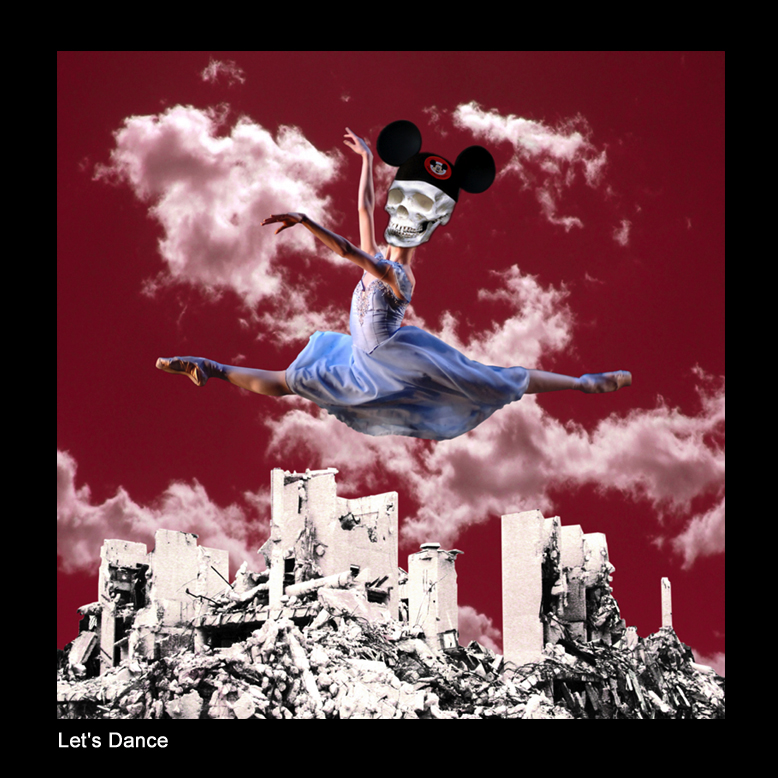 Bravados of a prankster who likes to confuse codes? Only apparently. The works of Papeschi, like all the actions which have irony as their matrix,  start from a base of reality. Nazi Fuckin’ Mouse. Walt Disney was a reactionary modernist, friend of Mussolini, Hitler and Goebbles, and he was a card-carrying member of the American Nazi Party before war.  His fascination for the esoteric Nazism and for the Nordic symbology comes out in Snow-White, Cinderella, Sleeping Beauty and Fantasia.  Slavery is depicted as a bucolic holiday in Walt Disney’s first short films, and the Indian stereotype is almost embarrassing in Peter Pan. We grew up with The Rescuers, we adored Monster & Co., we cried buckets for Bambi, and still… And still family uber alles. The productive framework is sacred. The different one has to integrate in society. 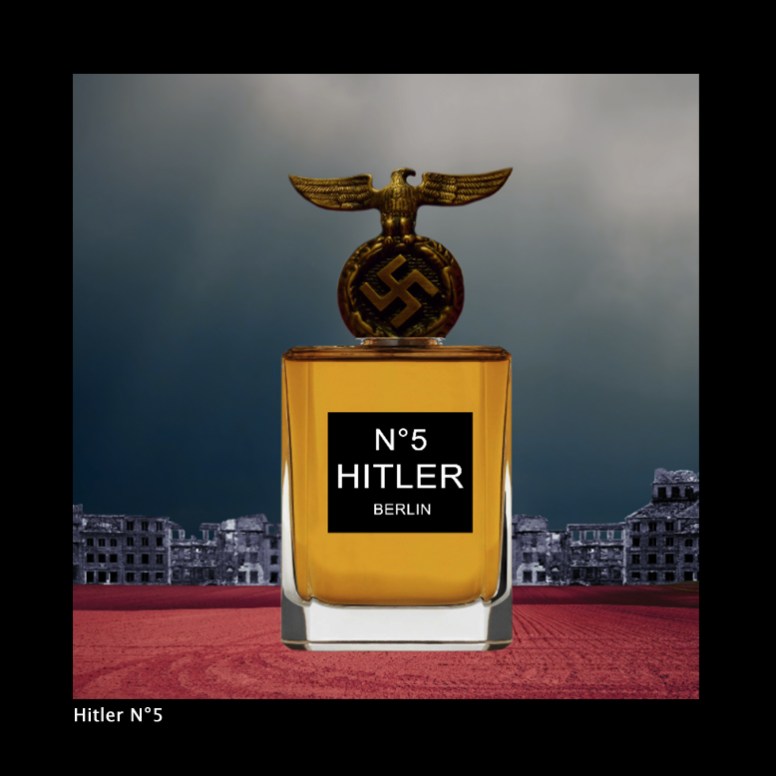 Max Papeschi shows us the perfume Hitler N° 5, and the toten-kopf Fashion Victim wriggling naked in front of the two hooked C of Chanel. In fact Coco Chanel, during WWII, had an affair with the boss of the Gestapo in Paris, who was blonde, handsome, and twenty years younger than her, and, between a little of this and a little of that, she became a spy of the Nazis for sex. 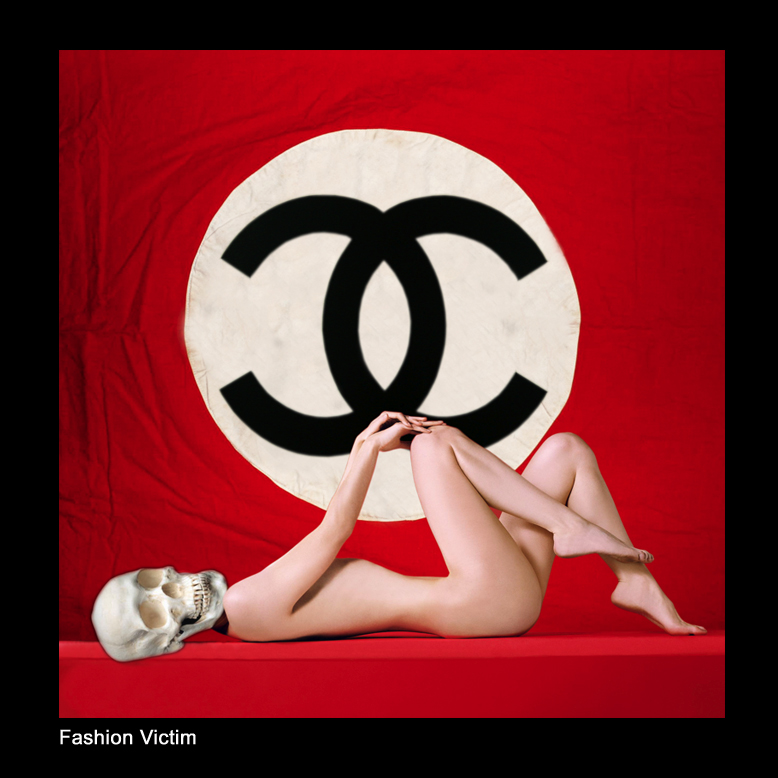 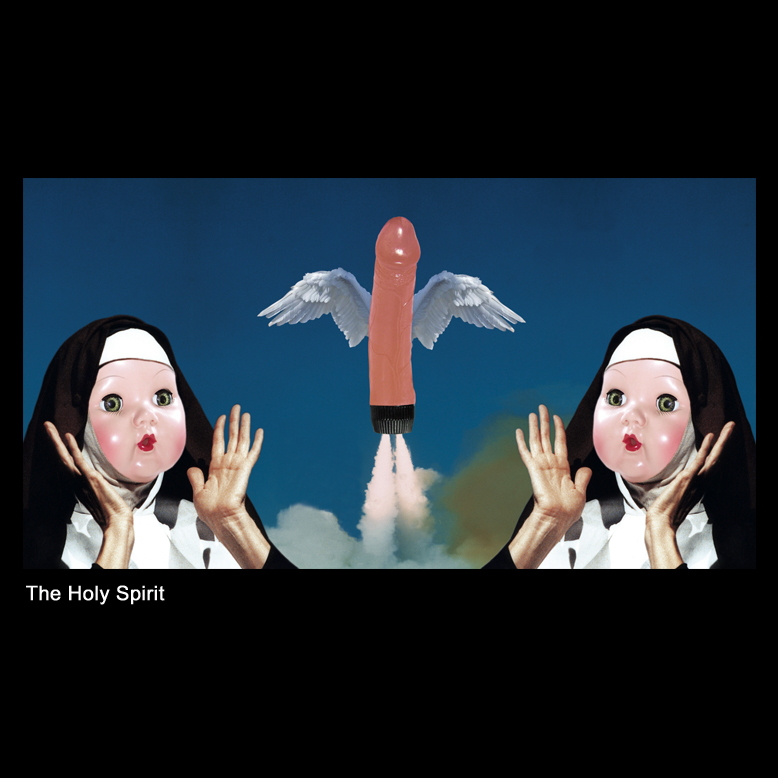 The defenders of the three revealed religions are evil robots strolling through debris. 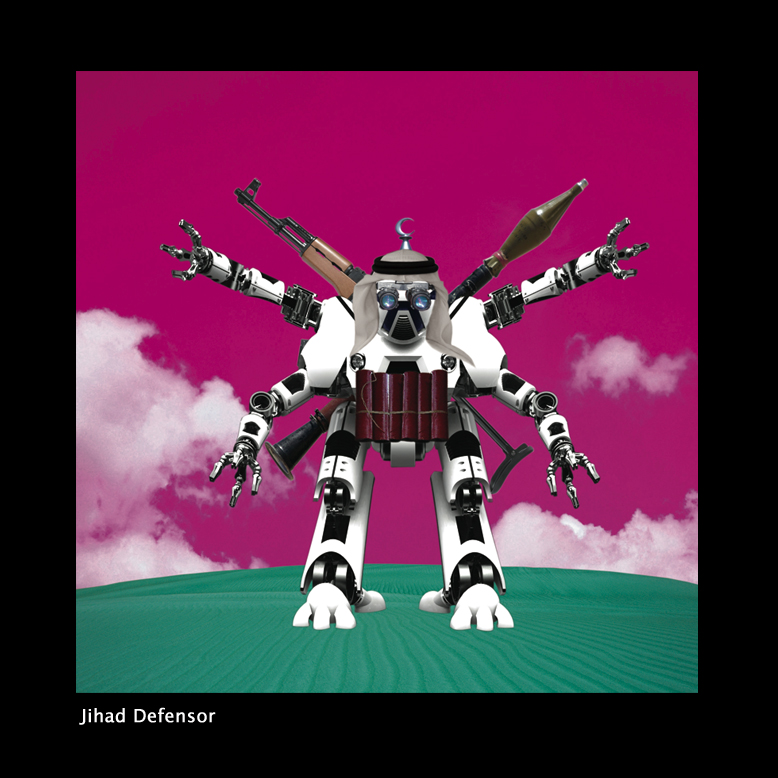 The risen Jesus has very kitsch robot/golem’s connotations,  while revealed Jesus chooses the Hollywood hill to show the wrath of the lamb. With action-movie big guns, to be sure to have the maximum visibility. 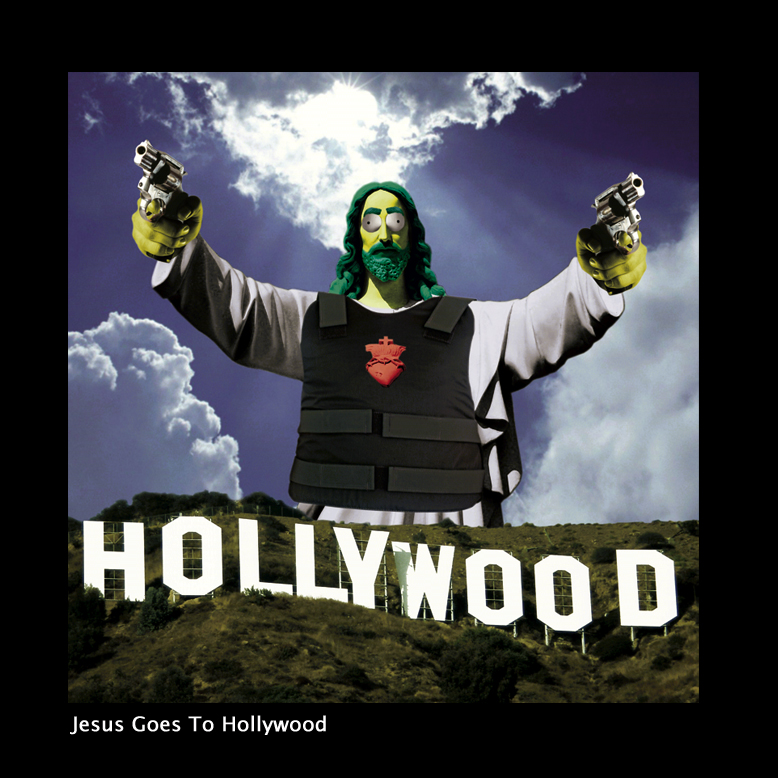 And the Nativity Scene? What would Jesus have done if he was born in the contemporaneous Bethlehem? The same things of the original one. He would sacrificed himself in the name of God, challenging the Roman/American authority and the one of Pharisees of Sion. Maybe the only obsolete element would be the cross. Now there are the explosive belts of shuhada, the martyrs, translated in the West as suicide bombers. Baby-Boom, for a little Palestinian Jesus. 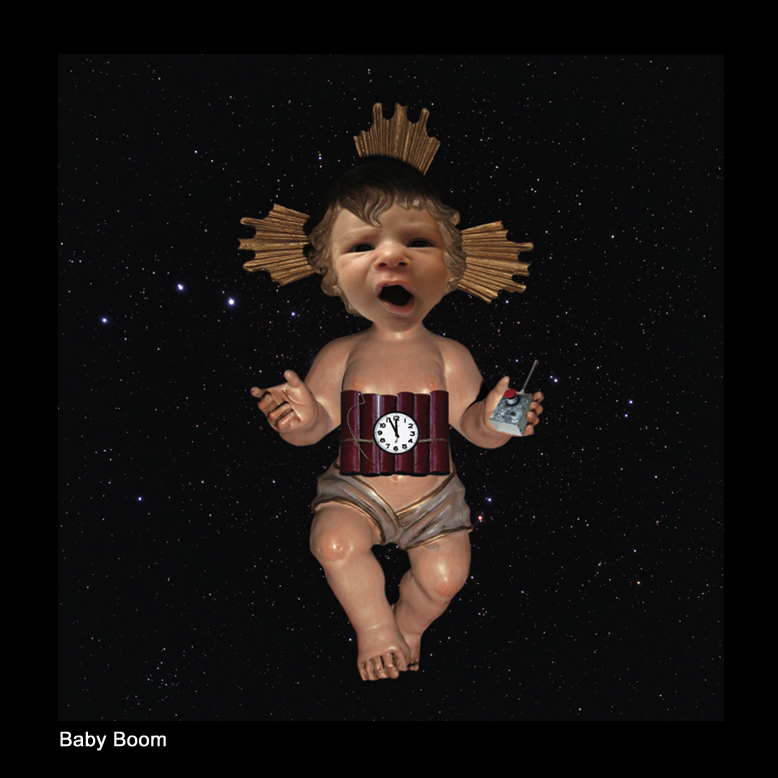 All the work of Max Papeschi is about power.  Temporal and spiritual, mediagenic and recreational. The power of hypnotizing and creeping into minds, the power of taking lives, of killing and destroying.  The power of market. The power is as it always was. Dirty, ridiculous, bestial and obscene. 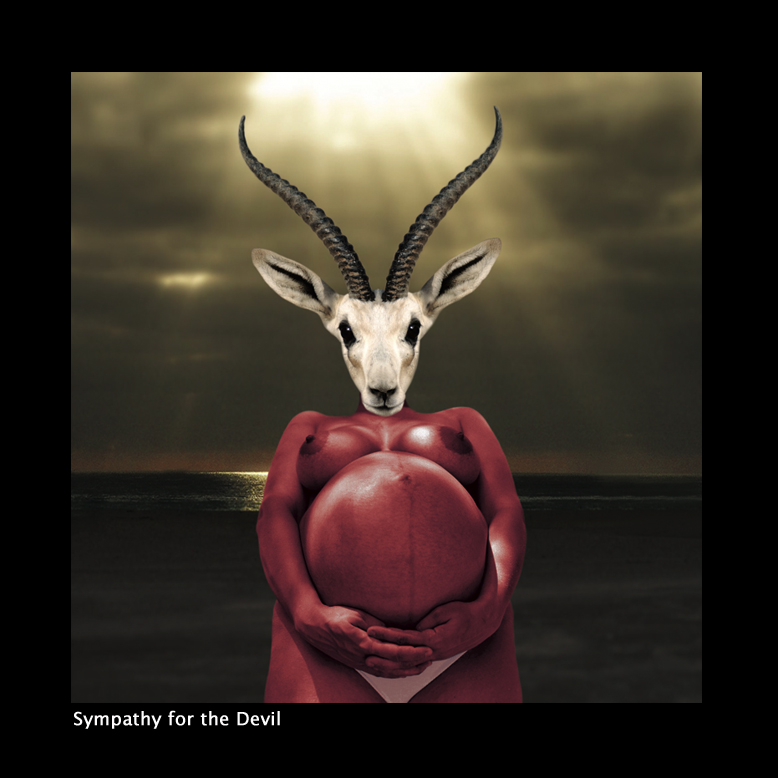 As the one represented in Greetings from Italy, in which a clown, with white, red and green wig and make-up, shows the middle finger to everybody. There are the beauties of Italy besides him, the Coliseum and two naked women, with high-heels, open-up legs and monkey smiles. Around them, ruins. 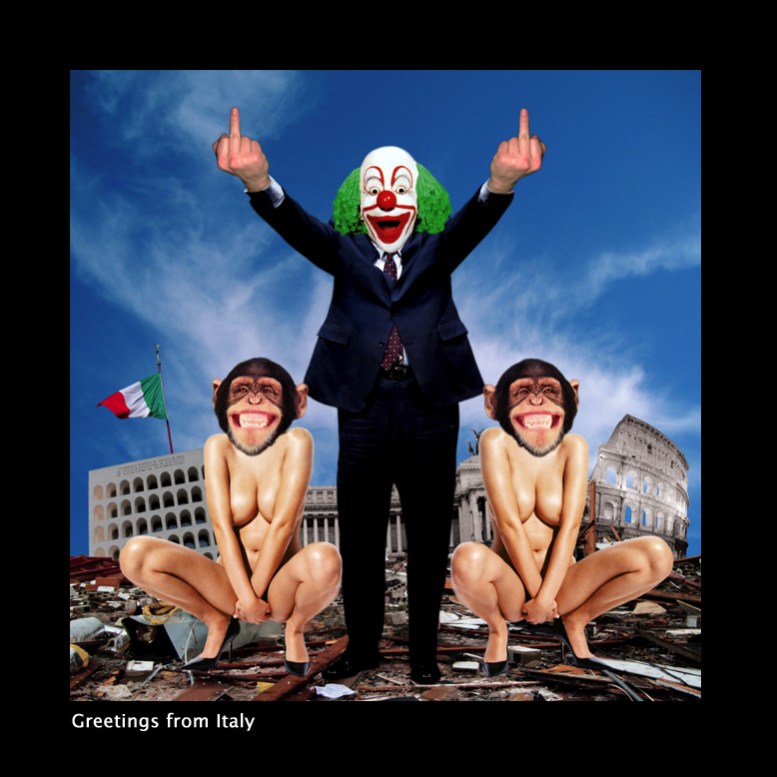 Good taste, decency, blasphemy, they are only window dressings.  The work of Max Papeschi is troublesome because it shows the truth, in a historical moment in which nobody wants the truth anymore. 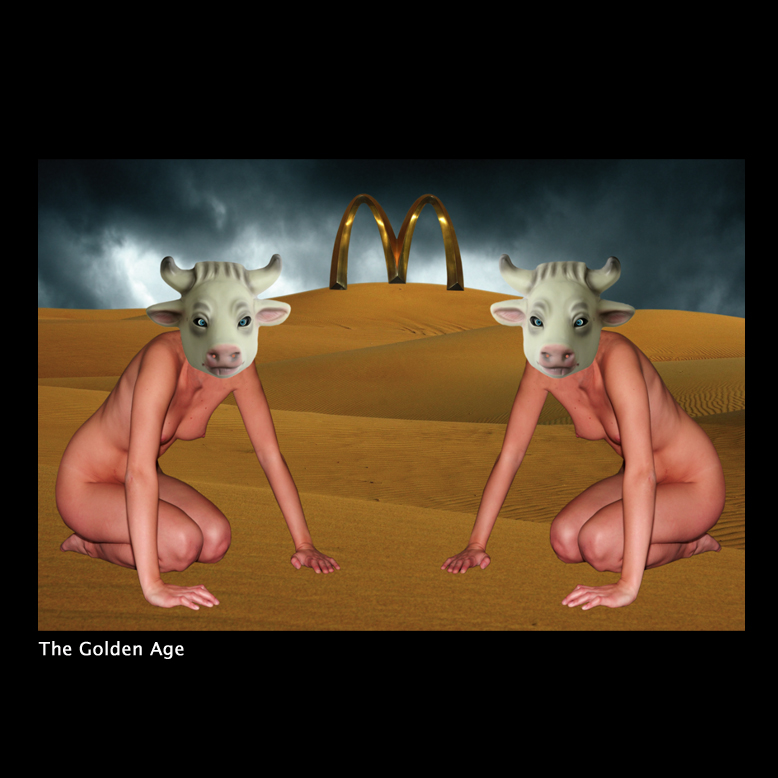 Michel Foucault, Discipline and Punish _ The history of prison, 1977

Published on Lobodilattice February the 14th 2011.