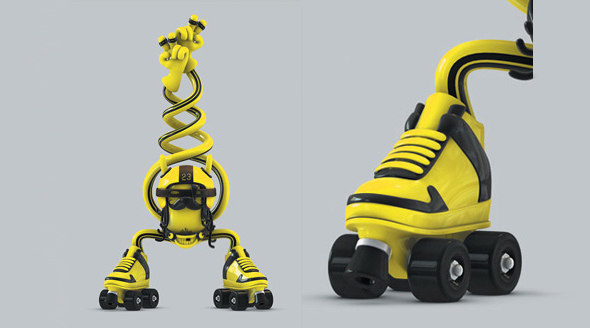 Trendy colouring, basic combining between black and yellow. Four wheel roller skates on ankle boots in 80’s Nike-style. Fingers which form victory sign, erecting on arms entwined as a DNA helix. Mark Gmehling represents gummy beings, a sort of humanity seen through the filter of a psychedelic drug which puzzles and reveals. 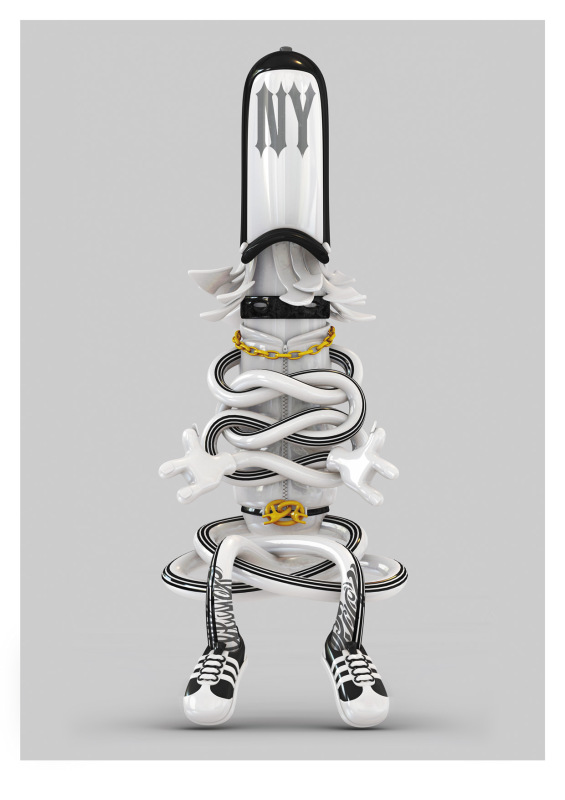 Their limbs form a fluid continuum, devoid of articulations, and they seem samples of commodities, of last generation toys.A savage creature with a straw-skirt, a bone in the septum, and the tools of the refined cannibal, which are a man-size knife and fork. 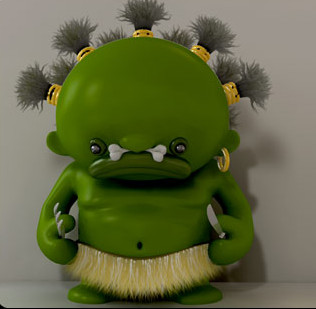 A guru with Sixty-style hair and beard, covered by an elegant Carhartt-like grey tartan. The yogic position in which he is seated calls to mind the buckle of his belt, an infinity symbol, repeated in the writings on his arms, “forever and ever”. 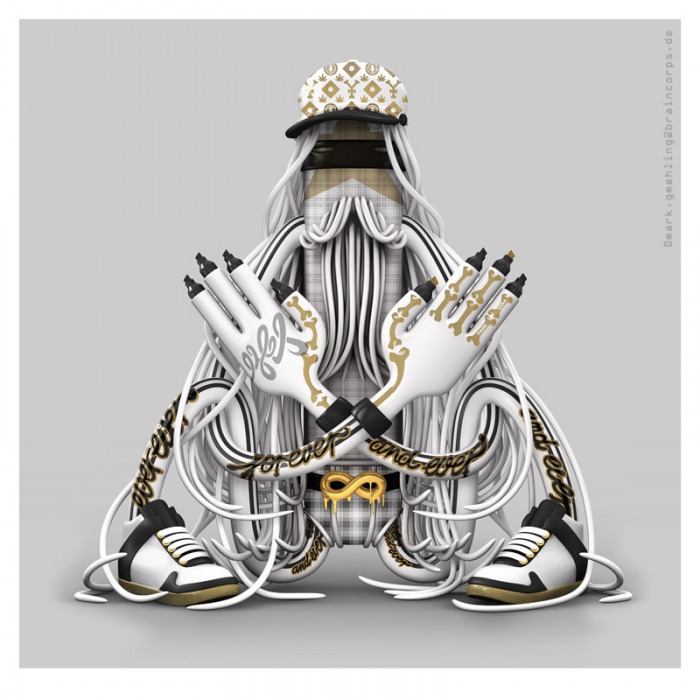 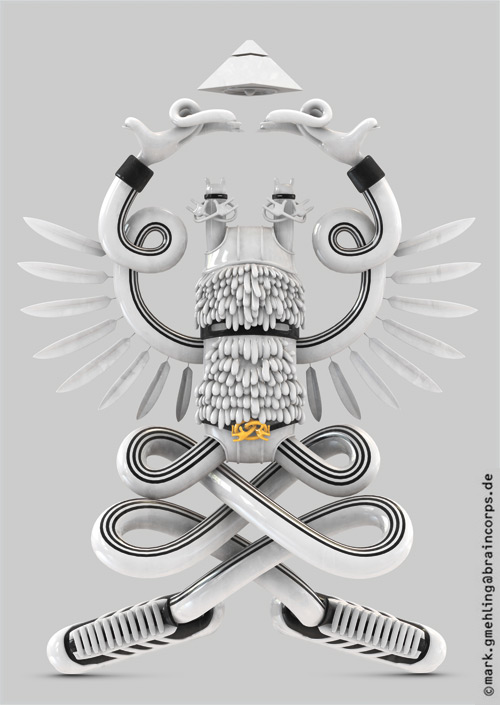 Flexible arms, like water slides. Black nails, middle fingers, sneakers that transform into bishop’s mitres, worn by a genius popping out of a tube of paint instead of a bottle. A green creature with suction pad tentacles and a lace collar. A Chicano wearing drawers, undershirt, flip-flops and towelling socks. 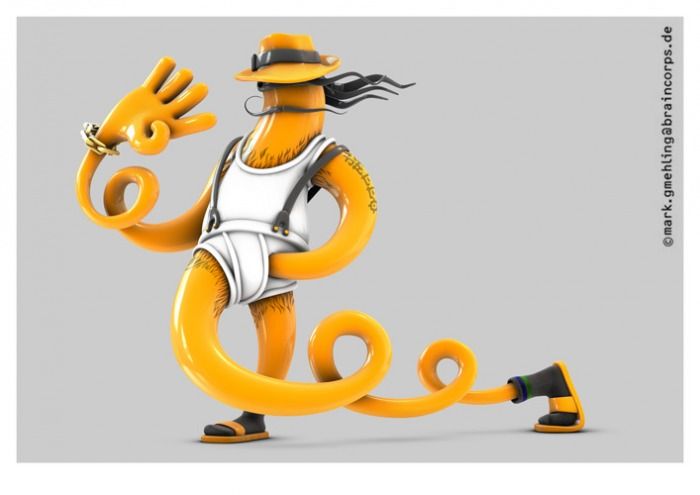 A piggy spectre, round as a ball, which is coming out from a McDonald’s fries cup. 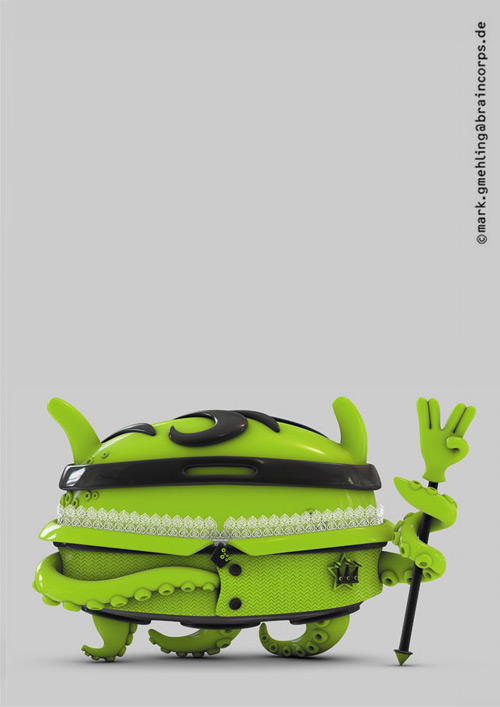 Gmehling represents a shapeless humanity, recognizable and identifiable only by the distinctive signs of the fashion system, both mainstream and alternative. 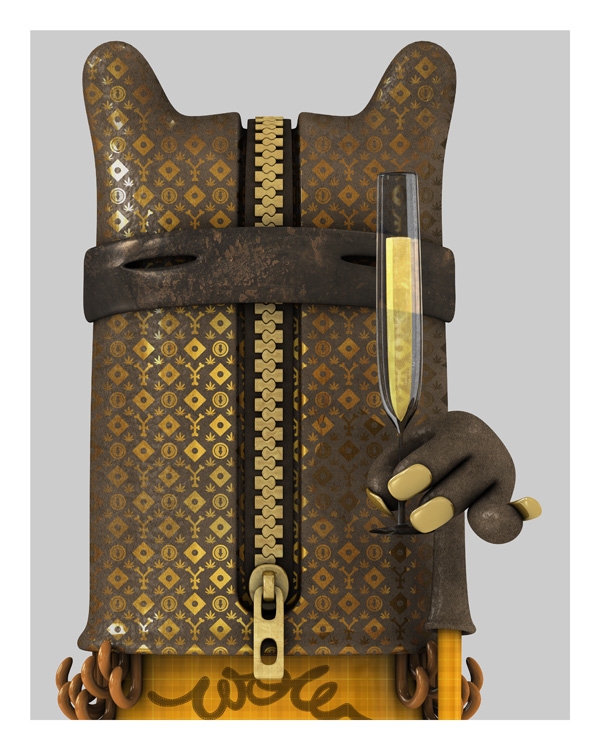 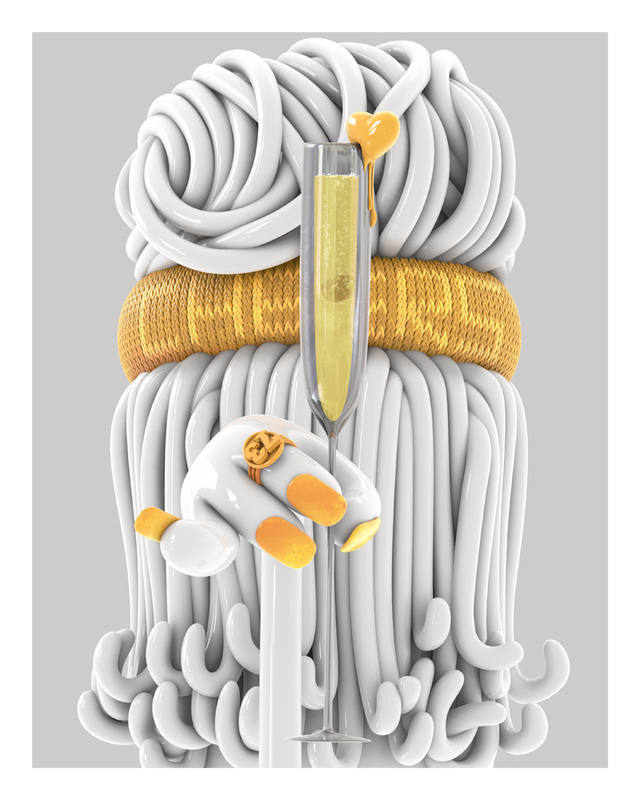 His work is set up on stereotypes: the roller funky-man, the Chicano yob, the wealthy street-guru, the rubbery break-dancer, the high priest of writing, the red as hell heavy metal freak, the holy man of martial arts, the genius of amplified concerts. 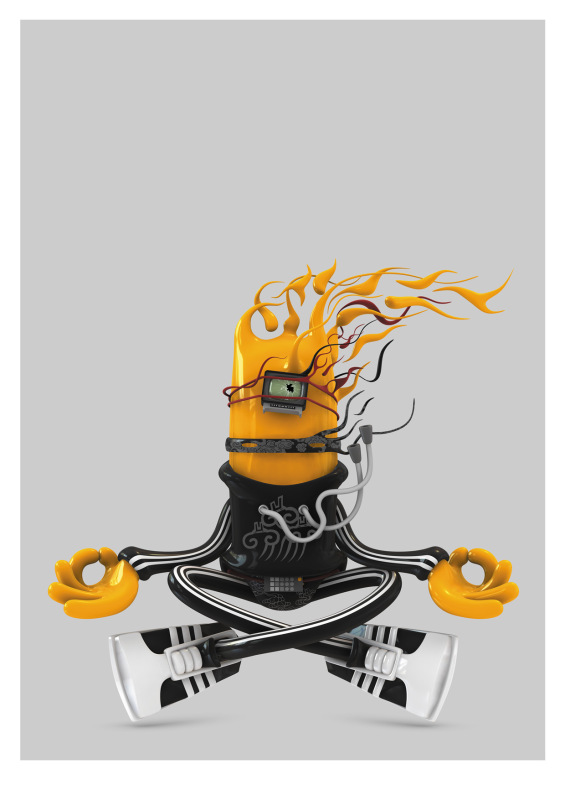 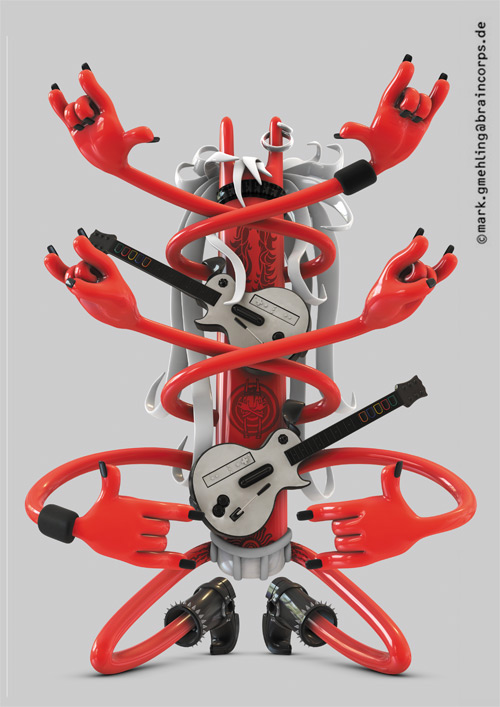 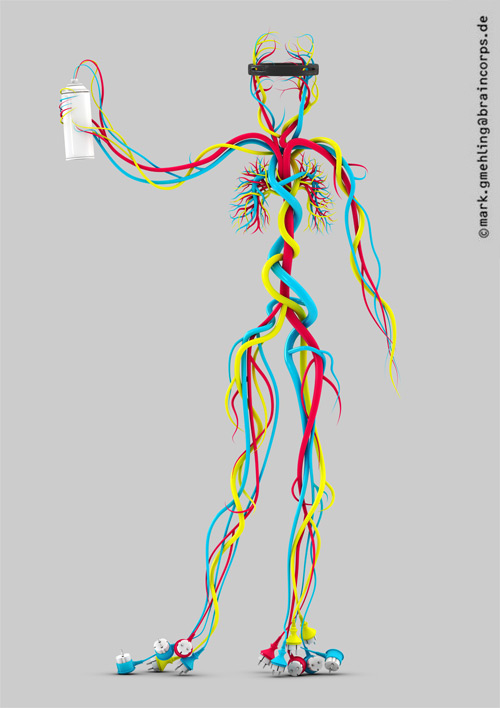 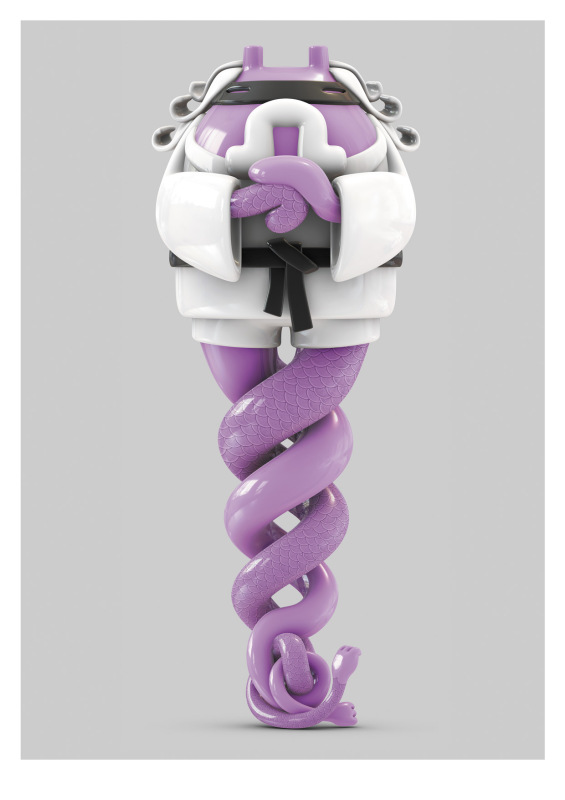 Gmehling pillories the prototypes of cool-gestures: to smoke a cigarette, to shoot a picture, to watch and to be watched. 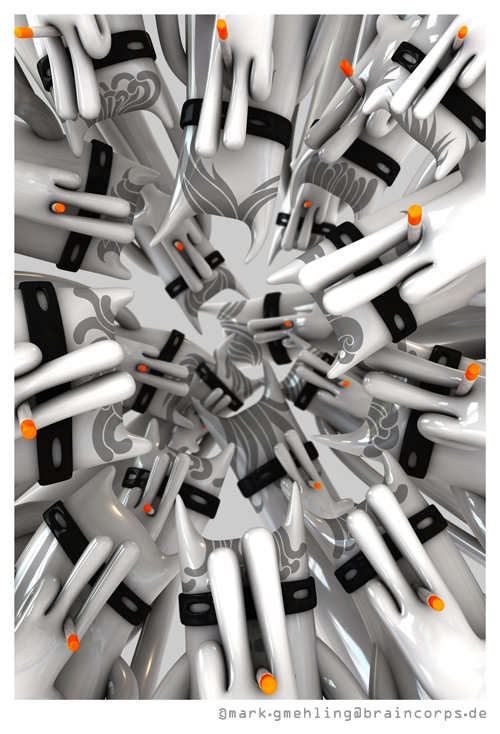 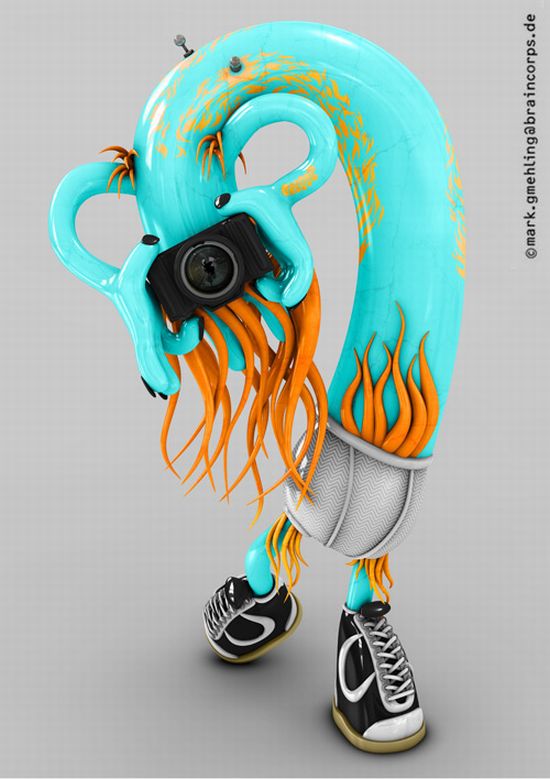 The series with creatures holding a flute of white sparkling wine seems to X-ray the fauna which usually attends art openings: the fan of fetish and body modifications, the Burroughsian veteran, yellow and covered by ants, the neo-tribal guy, the Paris Hilton like chick with blond hair and golden buttons, the pierced femme-fatale, the pseudo-punk with perfectly set hair. 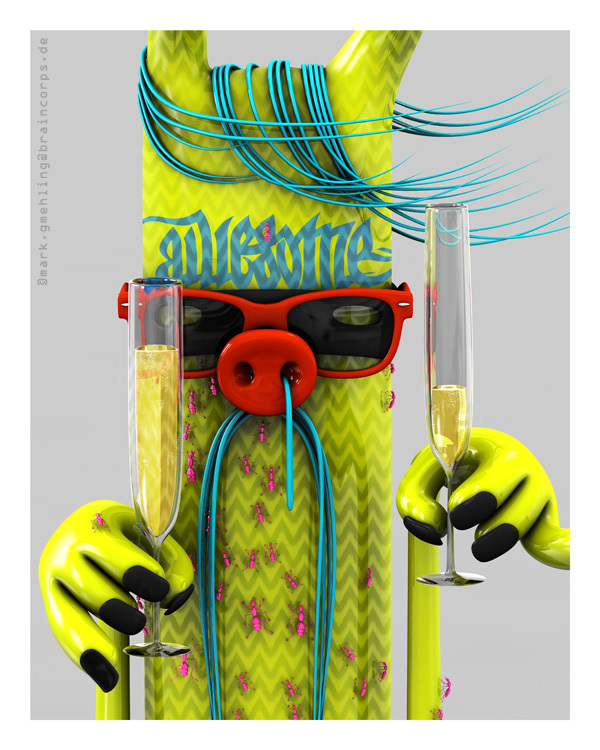 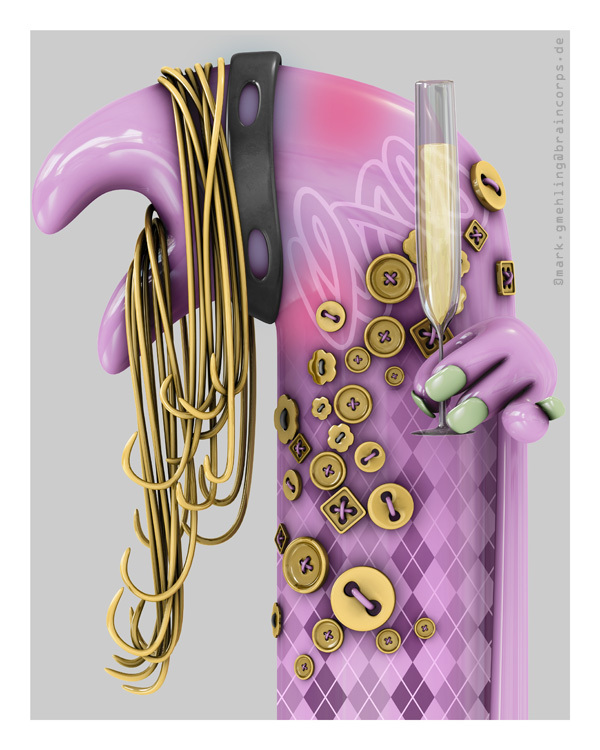 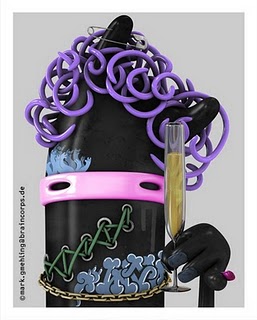 Mark Gmehling reveals the soul of trendy people, making it finally marketable like everything which composes their identity. 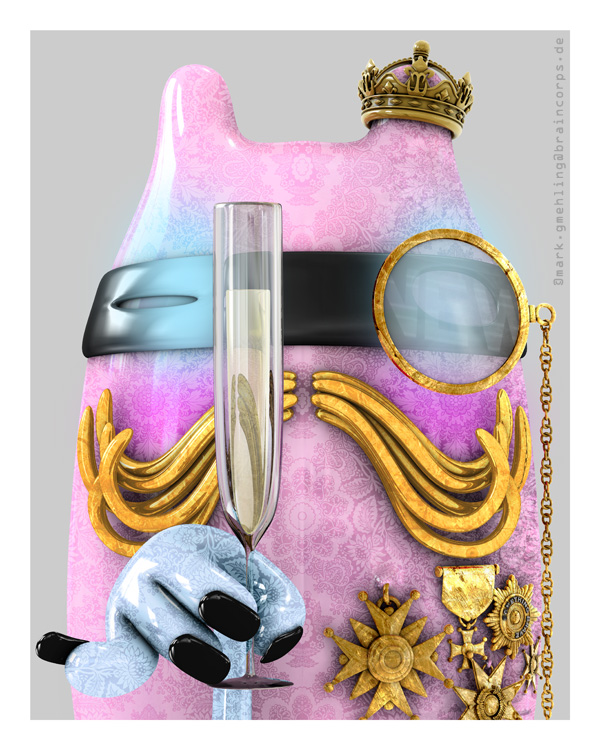 Critical review written for the exhibition Plastic Bling, opening in May 2010, at the Superplan Gallery, Berlin.