// THE LAST JOURNEY _ The artwork of Femke Hiemstra - Kainowska Kainowska

THE LAST JOURNEY _ The artwork of Femke Hiemstra

The bat, during its prodigious night-hunt, heard to the song of a nightingale. It came from a cage. The mammal asked to the bird the reason why he sang only during the night. The bird answered through the tears that one day, singing during the day, he was captured by a man and put into the cage. The bat scolded the nightingale, and then he ate him.

Reworking found in the net, from the original fable by Aesop 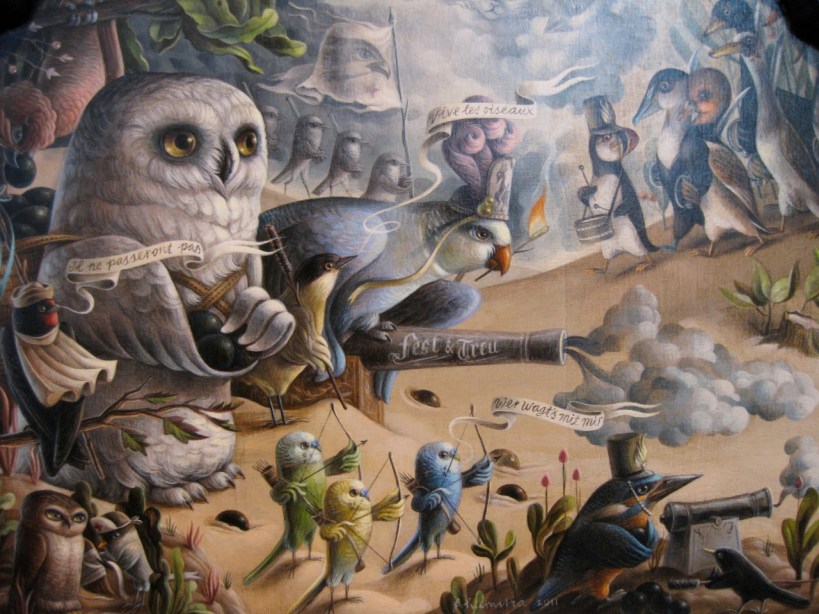 Narrations are irreplaceable cognitive tools, typical of mankind since the time  men and women have learned to speak. Each phase of life has its dominant narrative structures. Epic is for young warriors, lyric is good for female lovesick poets, philosophy is perfect at a certain age,  the versifications and mythologies of rock ‘n’ roll at another age. Then there are fables, which are perfect to explain to children how to pass through the pats of existence, and in what type of characters is possible to come upon during the journey. The revelation of evil is up to the ability of the narrator, who can decide to allude to, to censor, to show or to ignore it. 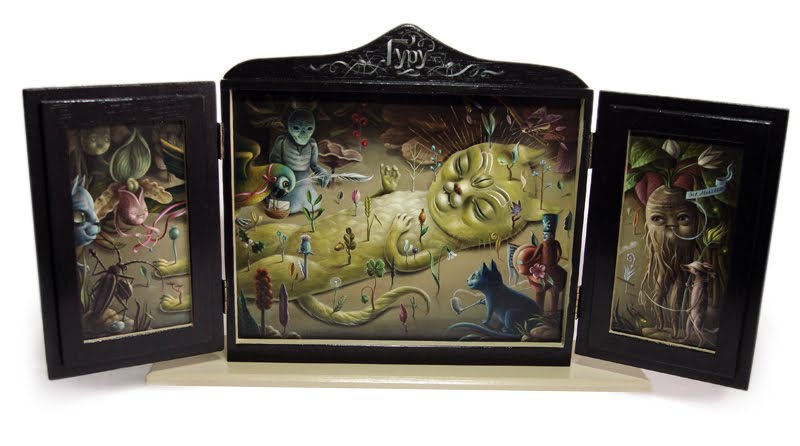 Femke Hiemstra mixes the existential chronotoposes of narrations, in works of art which use childish manners to transmit uncanny contents, suitable for adults. In this way Hiemstra brings to light how arbitrary are the divisions in genres which we have mentioned before, how the perception of adults is often insufficient, and how children have enough intelligence and  strength to pit against tragedy, loss and death. The artist often uses covers of books as support of her works. This feature relates to the strong narrative quality of her art, spreading an aesthetic which reminds of the hard-cover children books of early Twentieth Century. 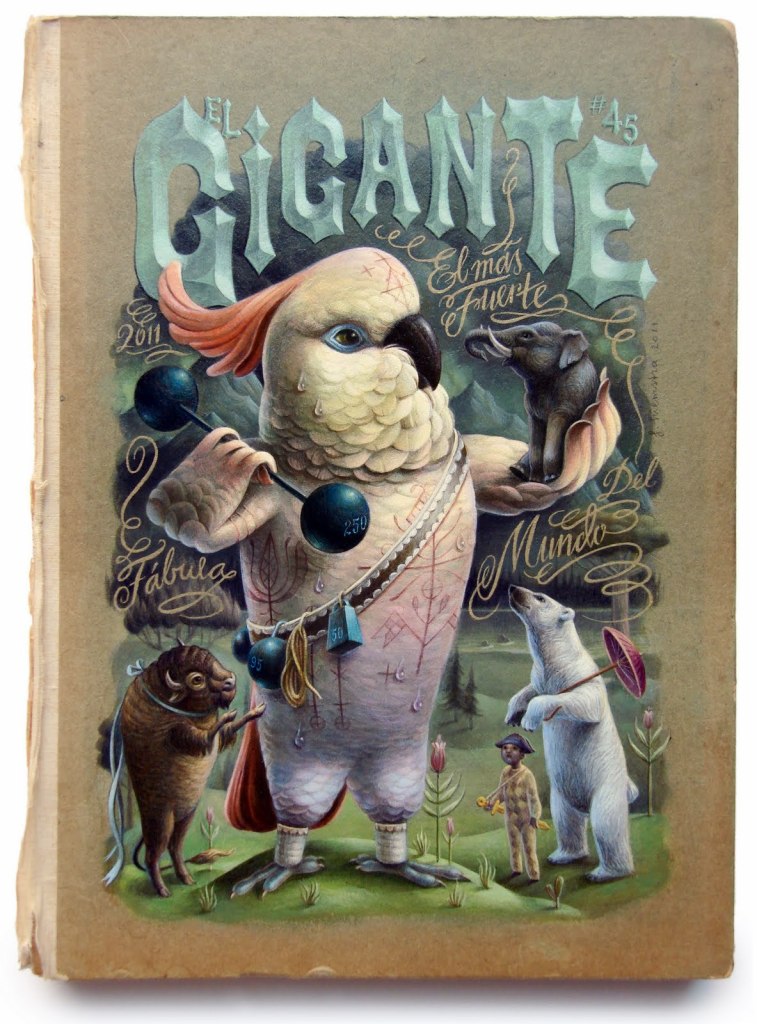 El Gigante is a brawny a tattooed calopsite- parrot, like the movie character Zampanò in La Strada by Federico Fellini. El Gigante is able to lift elephants, and for this reason he is admired by buffalos, white bears and clowns. 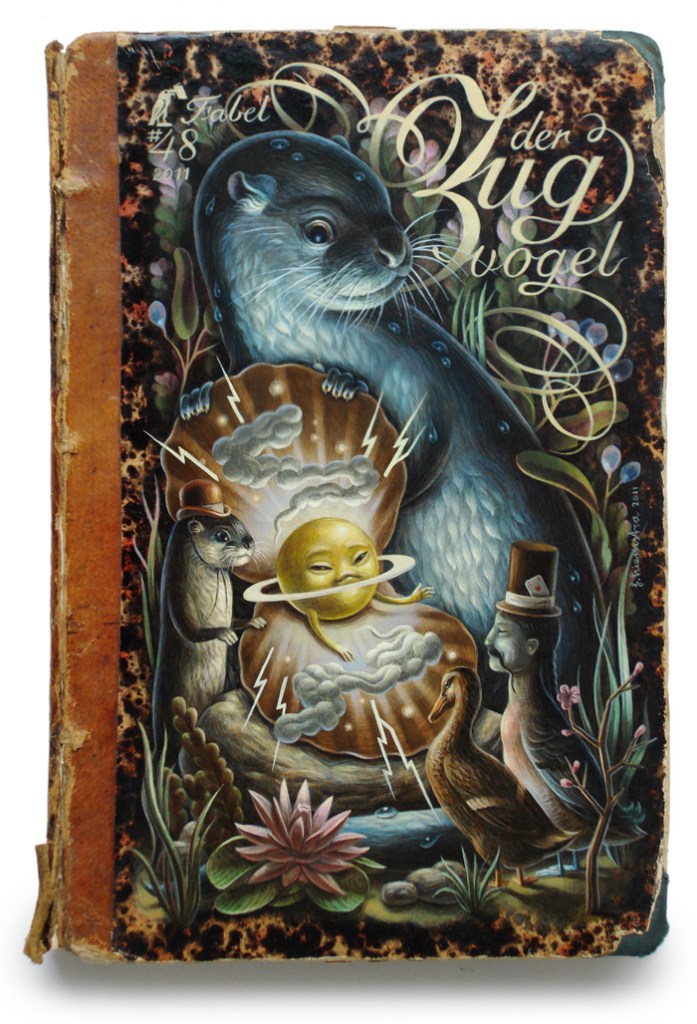 Der Zurvogel tells about an otter, a treasure-diver, who is showing a shiny pearl to an audience of bourgeois ducks. L’Hirondelle is a swallow, crowned and statuesque like a traditional tattoo. El Tigre is a dodgy feline with bowler hat and walking stick. He is climbing the rungs of the social ladder, surrounded by lynxes, weasels, cats and other adoring little predators. 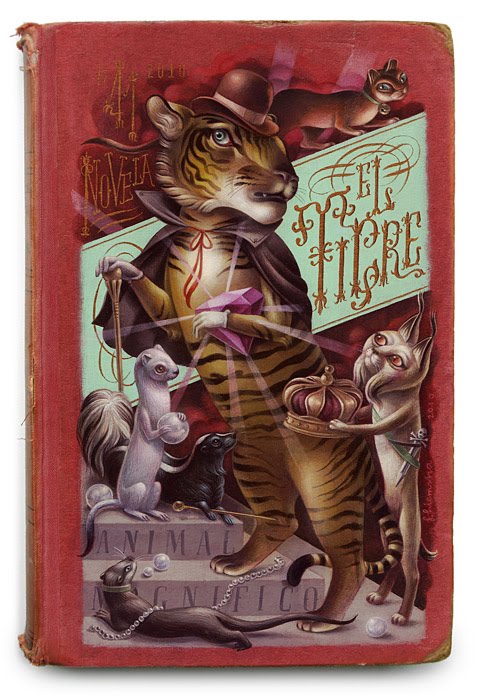 Le Chat Domestique is a creature who turned into a freak by over-pampering.

Le Dernier Desire is the one of a snowman who smokes his last cigar before the spring comes. 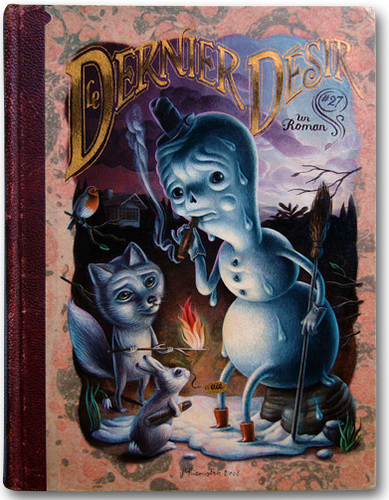 Making the covers of these imaginary books, Femke Hiemstra delineates some possible narrations.  The protagonists are humanized animals, like in Aesop’s fables. 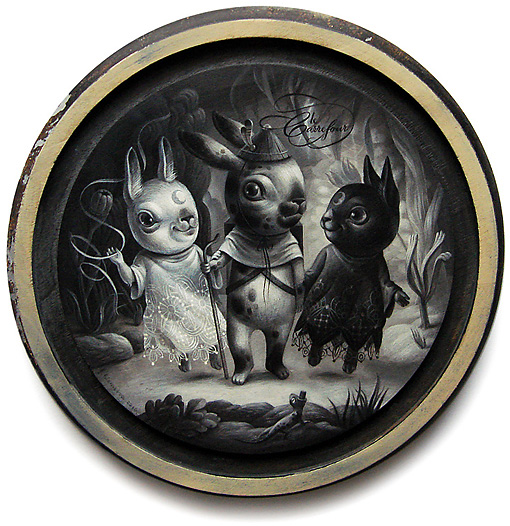 Other stories are depicted in a black and white style which reminds the archeology of American cartoons, with an atmosphere of the Mississippi Delta. 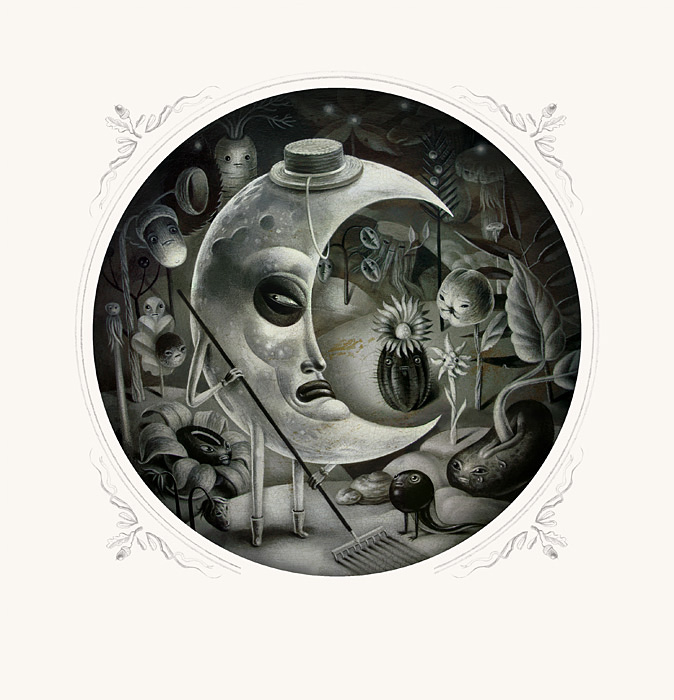 The Serious Gardener is a crescent moon with a big scowl, black mouth and eyes like in silent movies, surrounded by flowers, fruits and seeds which are looking at her with anxious tiny faces. This work is inspired by the album Alice by Tom Waits, about the forbidden passion of reverend Lewis Carroll for his muse Alice Liddell, aged six years old. The same Alice received a present by her beau at twelve. It was a story invented for her, Alice’s Adventures Underground, later known as Alice in Wonderland. 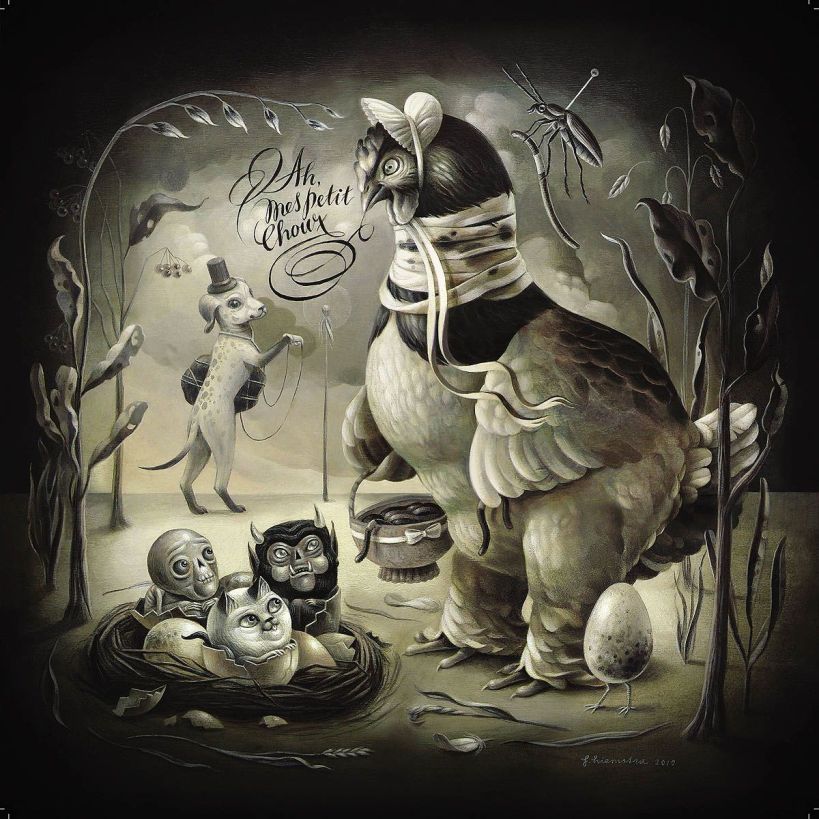 In the series of proto-cartoons, we also have a mammoth hen with basilisk eyes and Baba Yaga’s legs. She is carrying a basket full of worms to her nest of skulls, little devils and satanic chicks. 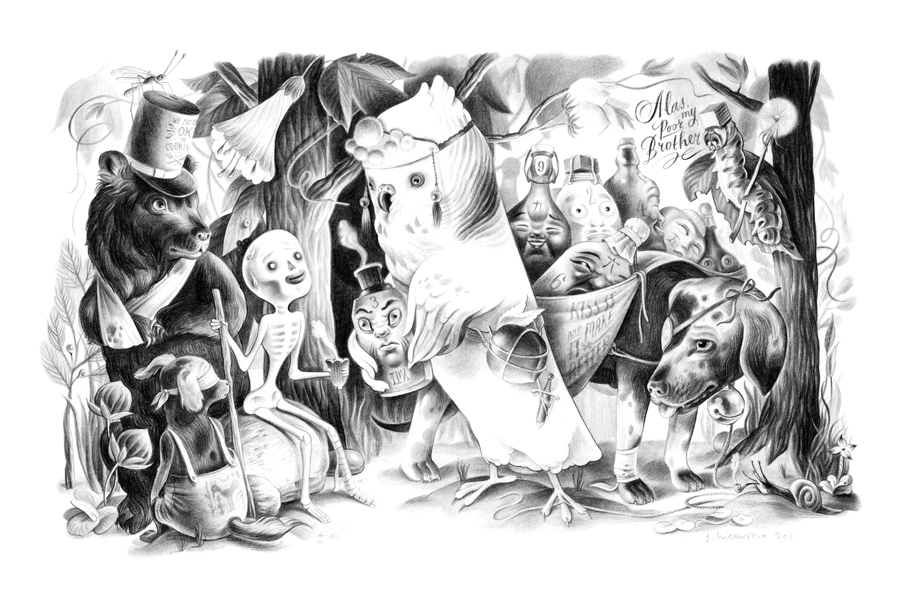 Le Charlatan stages a parrot, who is selling bottles of medicative brews. The bottles are animated, each one with a different doped expression, from  euphoria to bad trip.  The clients of the sham parrot are wounded animals and little skeletons. 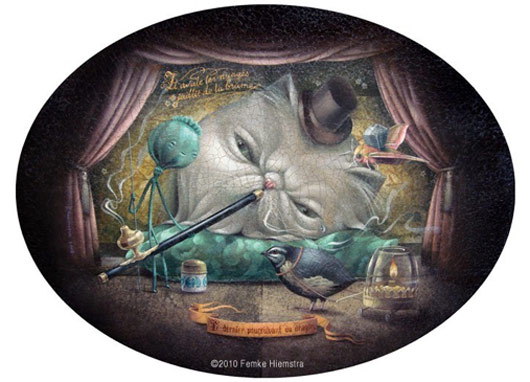 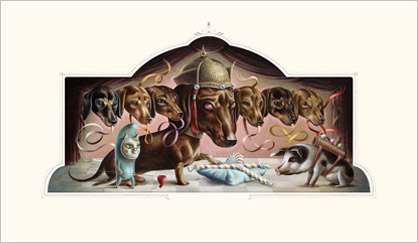 ut the birds which are passing before him, sucks from a pipe which is handed to him by a smiling green capsule of poppy.  Sugar sticks in The Candy Maker, offered by a hierophant dachshund with seven heads, promising infinite parties to a little naïve piggy.  Absinth, in La fee, la belle saison verte: a severed hand, tattooed and adorned by Flemish laces  holds an Artemisia Absenthium branch, under a she-cherub with waxen complexion, dragon-fly wings, tropical flowers, in company with a dormouse, with glassy eyes and a green chalice. In this work we see a recurrent iconological element of Femke Hiemstra, the hand of glory. 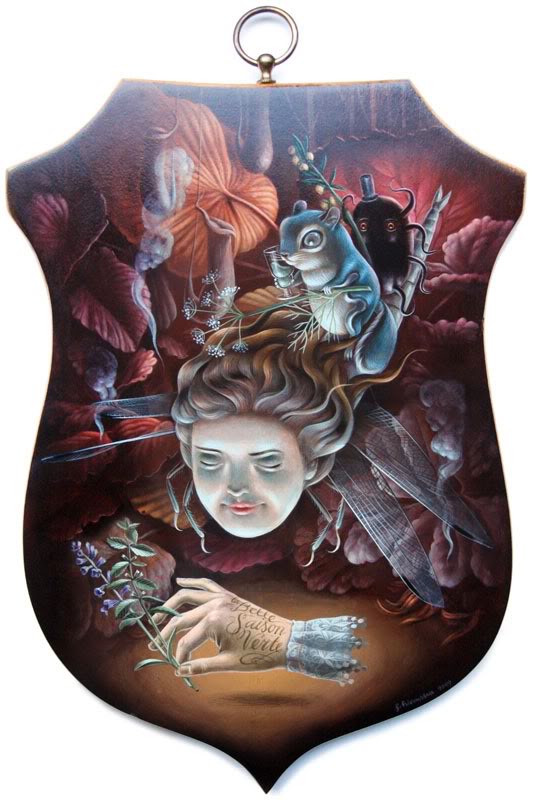 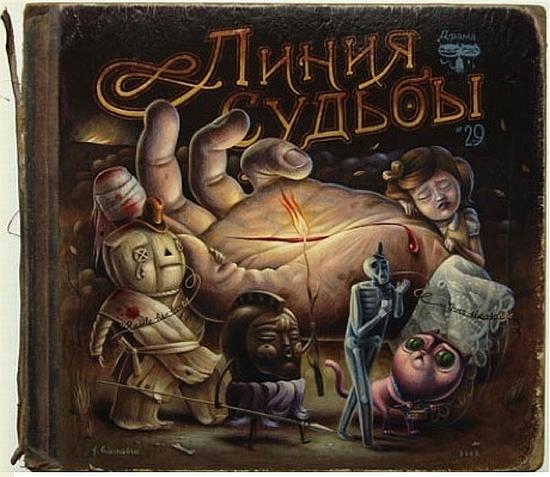 There was a believing in the past centuries, that the hands of particularly skilled witches could be the vectors of their powers, even after death. When a witch was executed, her followers had to get the hands of the corpse and balm them with a wax made of human fat.  The same thing happened with killers, especially serial killers: their hands were very sought after as amulets. In a board by Hiemstra there is the enchanted relic escorted by a funeral procession, with a frantic cat, a slightly voodoo rag-doll, a little skeleton in El Dia de Los Muertos style. Another funeral is staged in Death of a Ghost, in which a line of little mice come along with a sarcophagus, similar to the biscuits of Edward Scissor-hands. 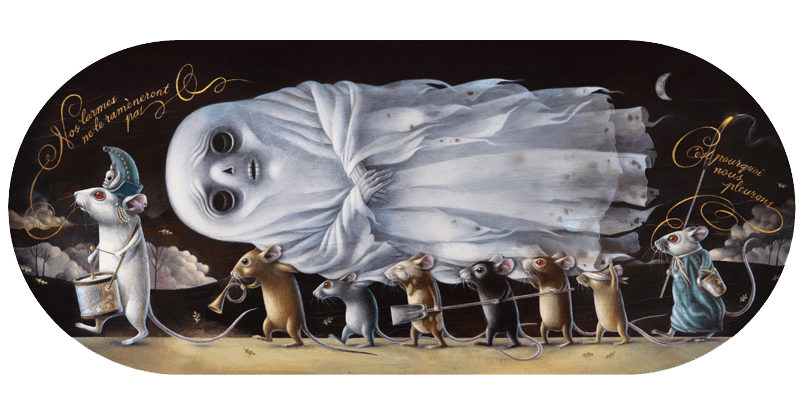 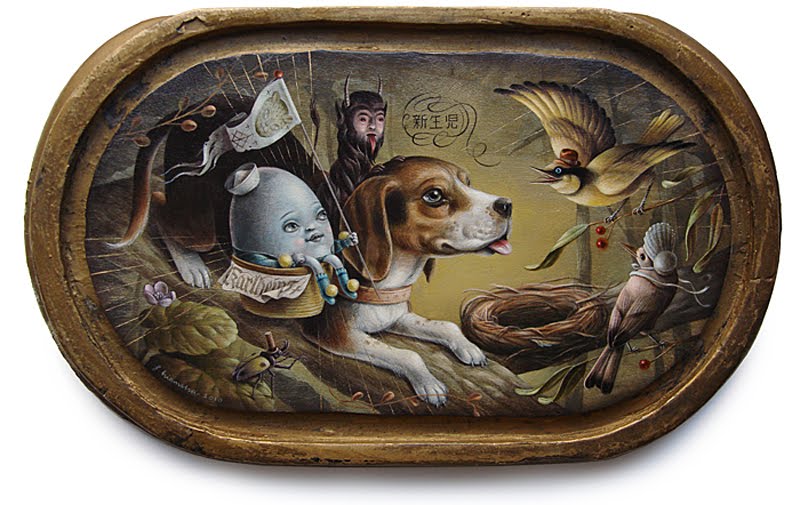 Beside death, there is birth, as much problematic and frightening The Newborn: a beagle ridden by a demon carries an egg with face, legs and childish clothes to the nest of two exultant birds. Der Fruhling: a panting, flushed and happy seed is spreading another little and rosy seed from a slit which seems a vagina. 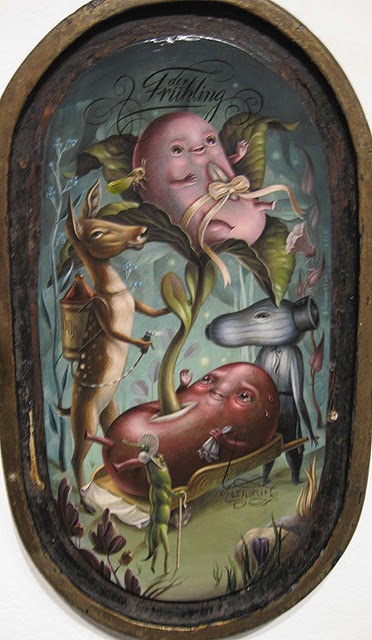 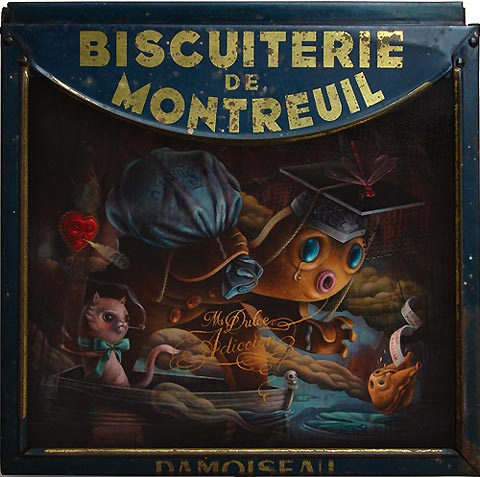 Beside books, Femke Hiemstra also uses as support for her works objects which reveal her passion for vintage packaging. The cookie-box of The Fortune Cookie Hunter tells about the escape of a sugar little-fellow, on a boat with a skull for figure-head and a pink cat as helmsman. The sugar little-fellow wears a bachelor hat and cries, looking at a fortune-cookie who is falling in the water, together with the scroll of his prevision. The pack of cigarettes Mill-Bank Virginia shows a night camp in which everyone, rabbits, birds, flowers, are happily smoking together with the pack himself. Also another piece by Hiemstra is dedicated to the aesthetics of the smoker: a green owl with pipe and smoking tube, a flying match,  a screech-owl with a cigarette holder put on the finger like a ring, in Twenties diva style. The hand of glory is featured also there. 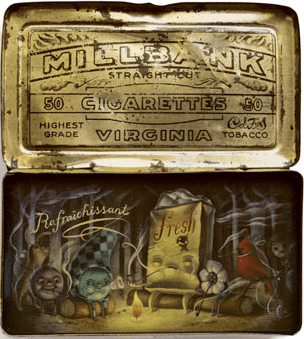 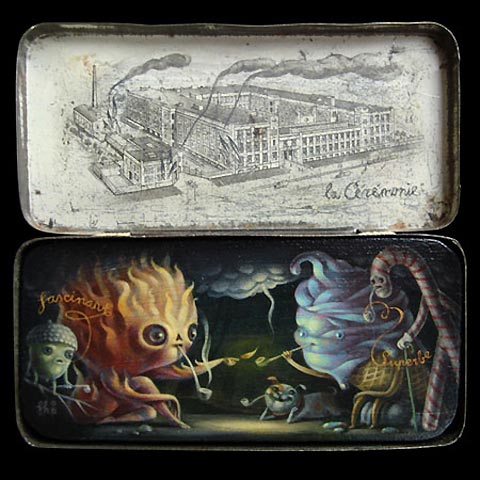 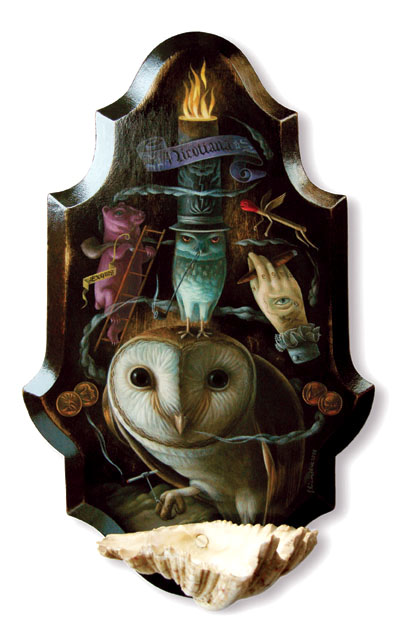 Death, birth, mental manipulation, methodologies of hypnosis, fable archetypes, naïve and deceiving characters, nostalgia, cult of the vintage and antique objects as a support of memory: these are the ingredients of the nocturne, funereal, full of wonder and charm art by Femke Hiemstra. 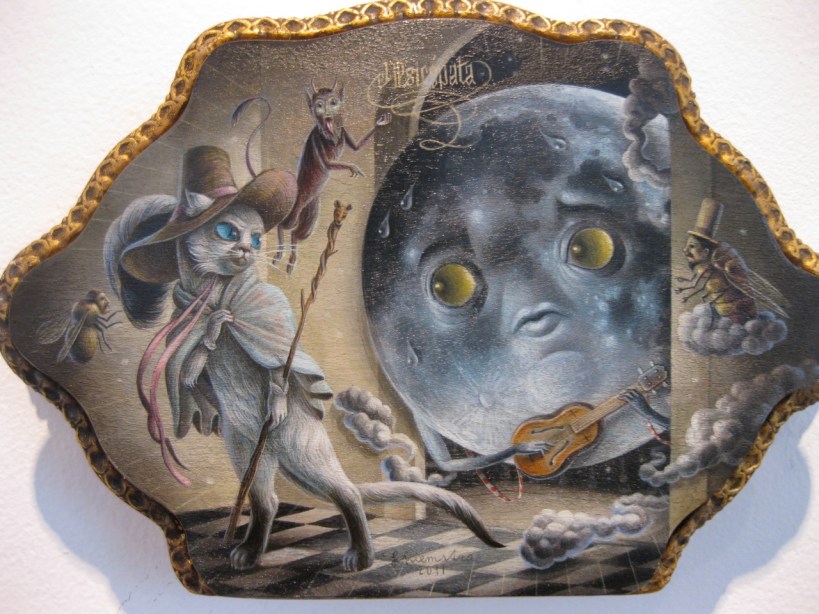 Published November the 11th, 2011, on Lobodilattice