THE REAL AMERICA: WELCOME TO HELL, KISS KIDS!! ___The artwork of Ron English 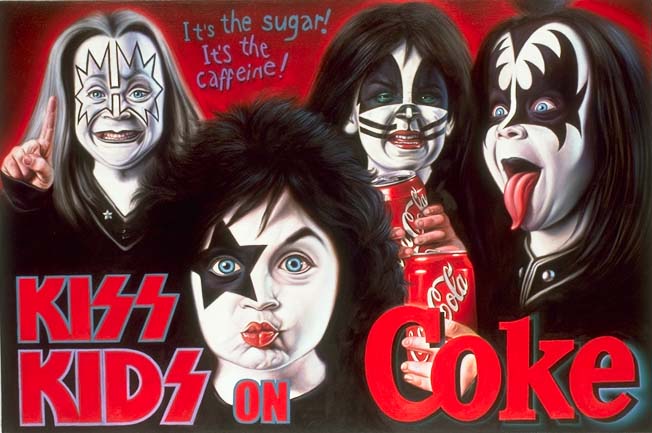 And it all got to damn much for me

Just got to damn rough

And I pushed away my plate

And said boys I’ve had enough

And I lay upon the table, another piece of meat

And I open up my veins to them 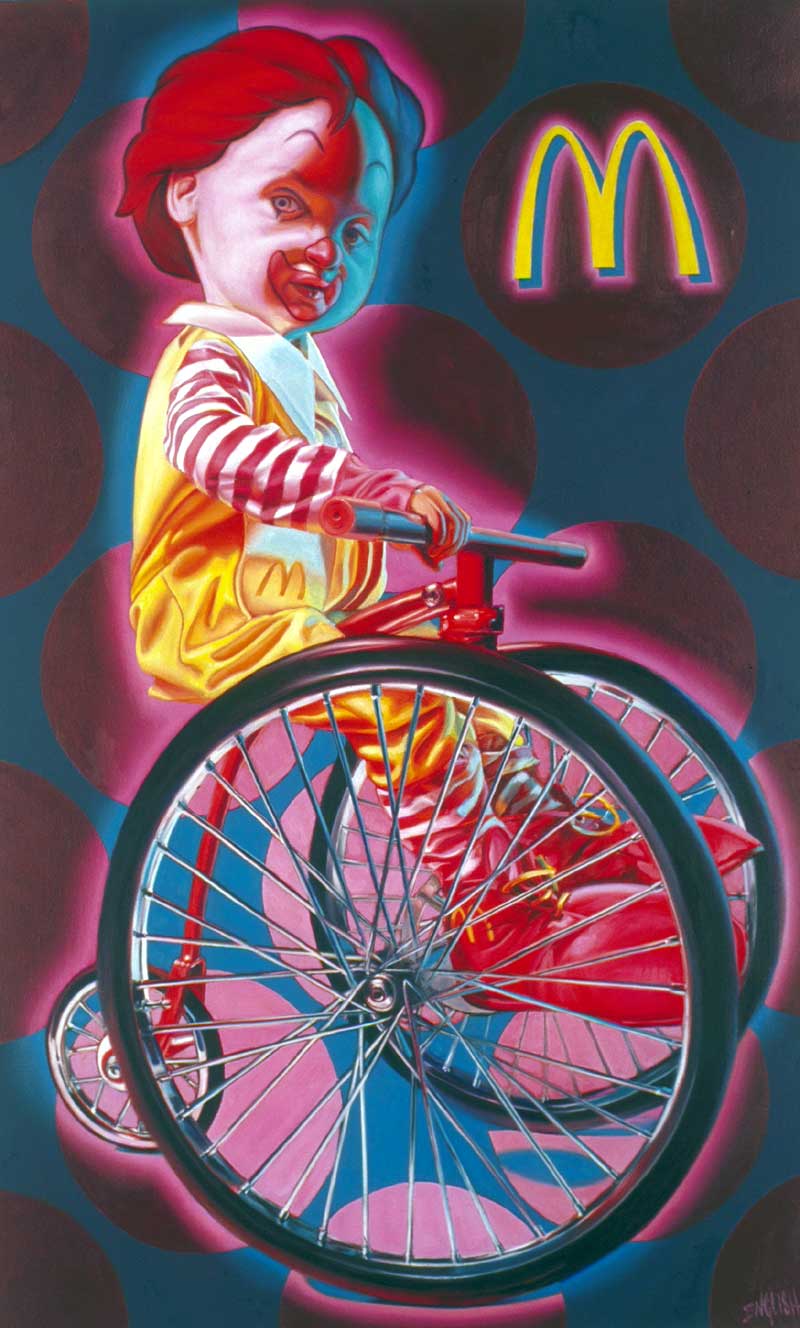 They will not force us

They will stop degrading us

They will not control us

We will be victorious 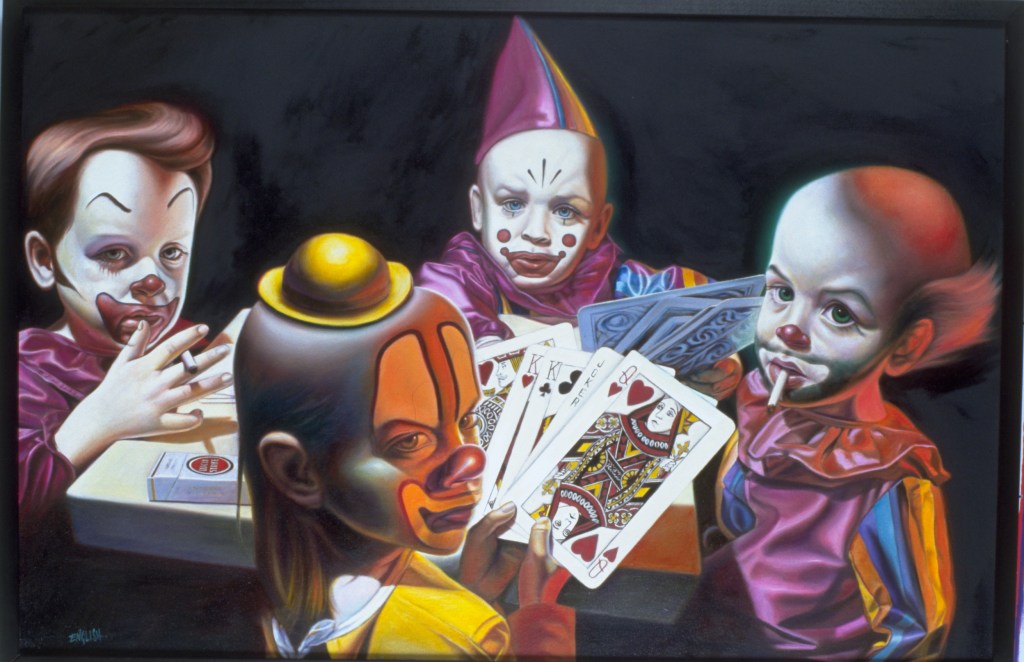 A Game We Play is the title of the first, unequalled novel of Simona Vinci, about abandoned houses in the fields, pornographic magazines and extreme sexual experimentations happened before the age of ten. The literal title of the novel in Italian is Nothing is Known about the Children. It highlights that childhood becomes an unknown territory for everyone who goes beyond its borderlines. The very new generations are always enigmatic, and adults can not actually know their world, but for its reflection. The child is the incarnation of the future, which is the development of the present in turn. The adults relate with the children’s world trying to mold it, and they often end with contaminate it with their monsters. 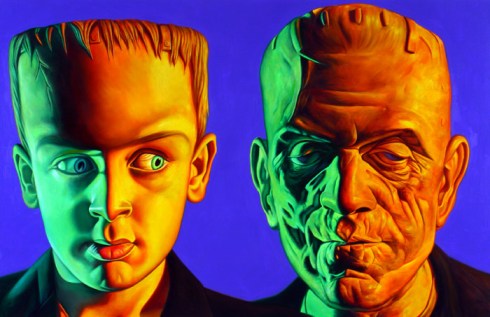 Like an anthropologist with his eyes wide open, Ron English studies American childhood. And the world which he sees and portrays is like a territory of war. Macaulay Culkin, the enfant prodige of Home Alone, went through years of alcohol and drugs after having experienced worldwide success. Drew Barrymore, the child of ET, was an alcoholic at nine and a cocaine addict at twelve.

Fame is precluded for the lesser beings, but not the imperative to be cool. More and more skipping the stages in between. Now, also little babies have to own a pair of Nikes. Toys are collected and unwrapped with an itch which leads a one-second-lasting euphoria, and then to rage and frustration. Ron English shows children dressed up as clown, with cigarettes and cans of beer in their hands, absent expressions, wide-eyed with drugs. 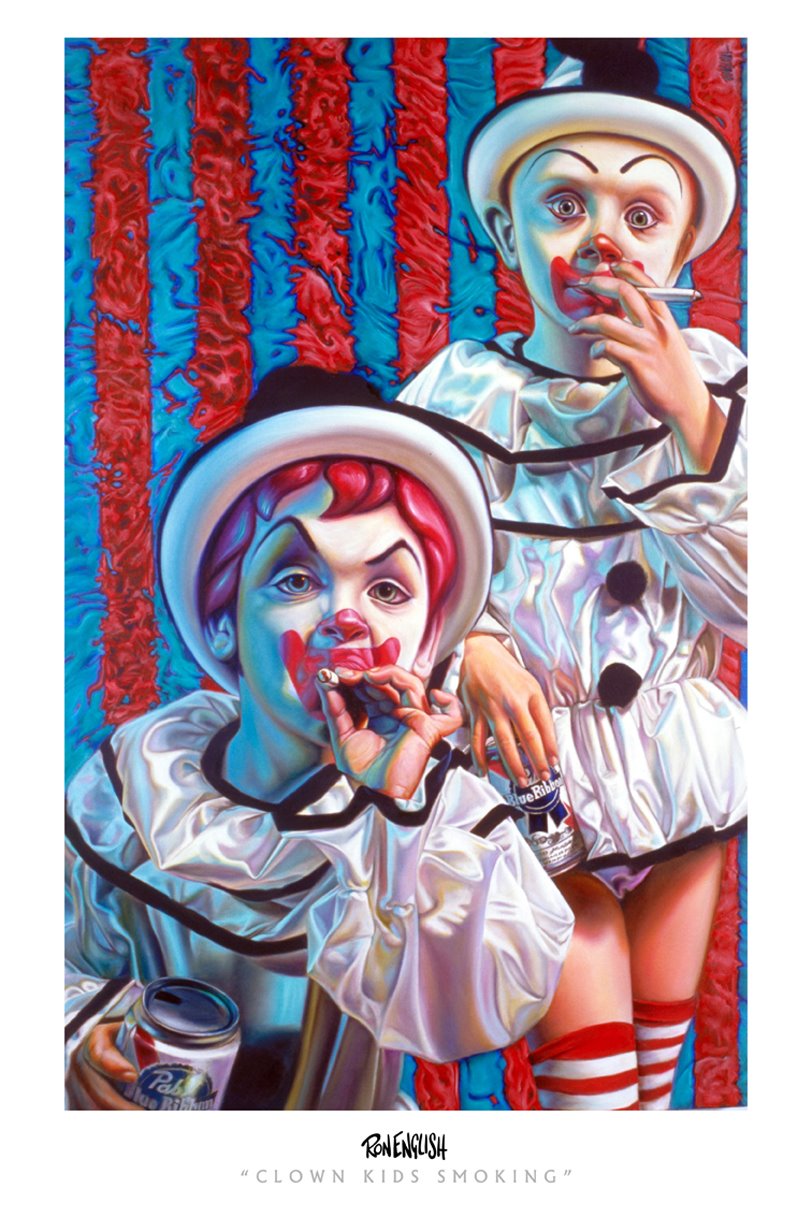 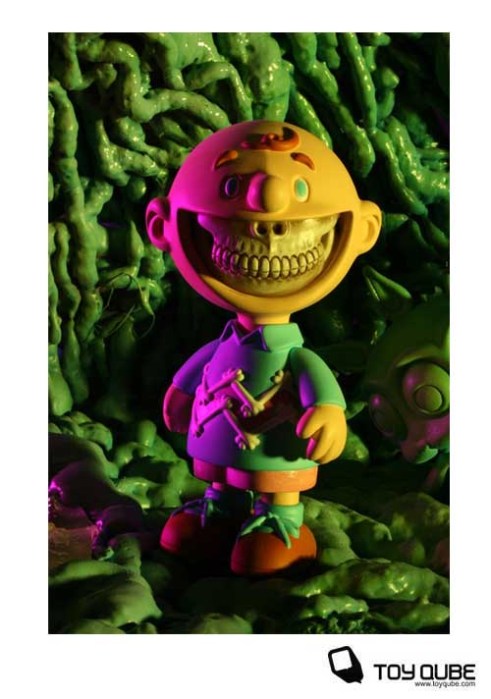 But it is not only the matter of some isolated cases, of an illicit, precocious and sneaking consumption. The problem is that in America the Government compels the parents to give to their children powerful psychotropic drugs, as soon as they show some signs of the so-called hyper-activity. If the parents don’t do that, they will lose parental authority.  The most frequent signs of the ADHD are detected in schools. They can be things like moving hands and feet during the lessons, rising up the hand before the teacher had finished to formulate the question, standing up in situations in which is requested to sit down, being not able to concentrate on details. Among the physical effects of Ritalin, Dexedrin and Adderall, we can mention: tachycardia, hyper-tension, psychosis, hallucinations, anxiety, confusion, mental deterioration, depression, aggressiveness, irritability, twitches, hypersensitivity, anorexia, nausea, vomit, vertigoes, skin rashes, abnormal hepatic functions, interruption of growth, sexual disorders.

The psychological effects, classified by the pharmaceutical corporations as therapeutic, are the suppression of every kind of spontaneous activity, the lack of sense of humor, the reduction of sociability, playing games and being curious, the increase of passivity, the submission in organized social situations, a limited or obsessive kind of focalization, the persistence to perform senseless activities. Here you have the upstanding citizen. And if he/she  starts smoking crack at the age of fourteen, we will have to understand. 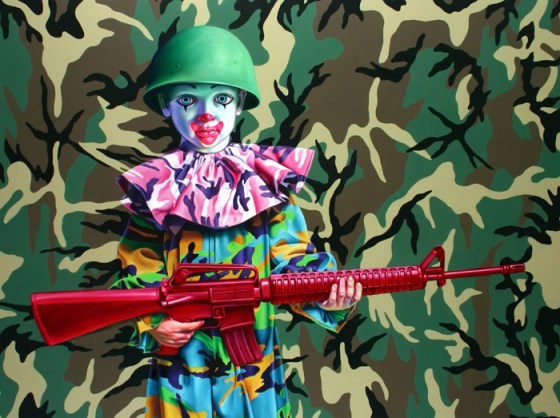 Ron English portrays little clowns with multicolor camouflage fatigues and pink AK47 in their hands. To learn as soon as possible that war is a game, nothing but a video game. To learn that killing can be funny if we earn money for doing it, and if we put a proper background music, maybe hard-rap or new-metal. We can become real toy soldiers, like the ones made of green plastic, only bigger, and maybe dead. 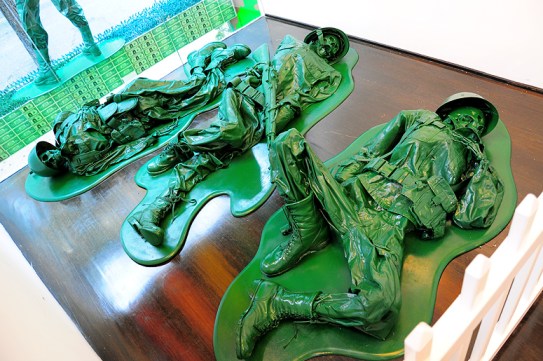 Ron English shows how freely one can pass from toy-guns to real guns.  Something similar to what happens in Winter’s Bone (Granik, 2010), where, in order to live through a critical moment in which she is threatened of losing her home, the seventeen years old Dee teaches her five years sister to shoot. 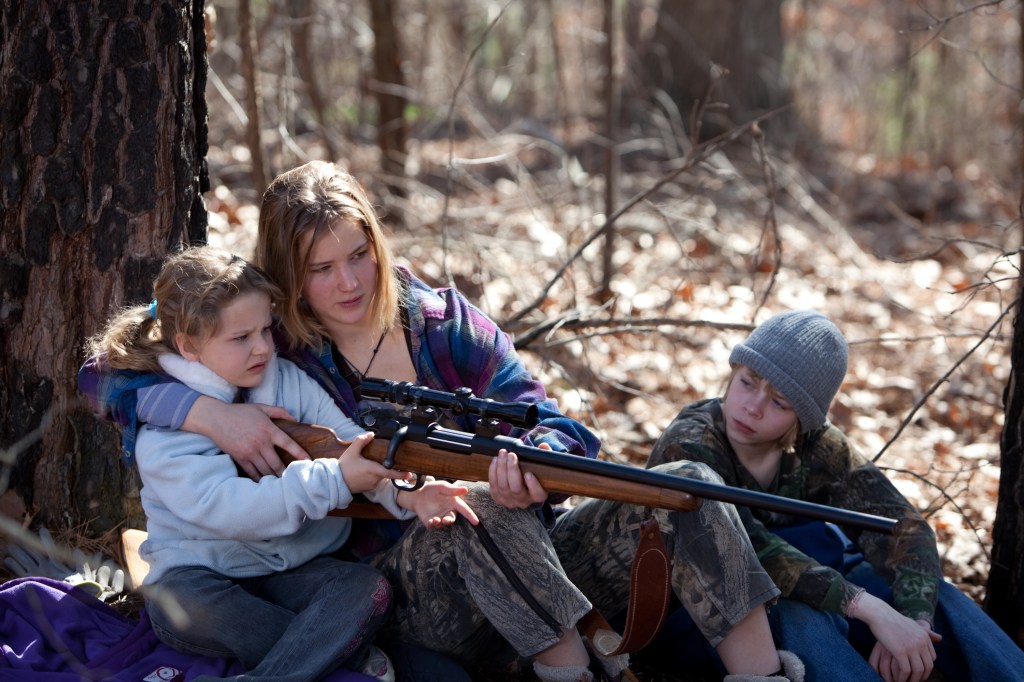 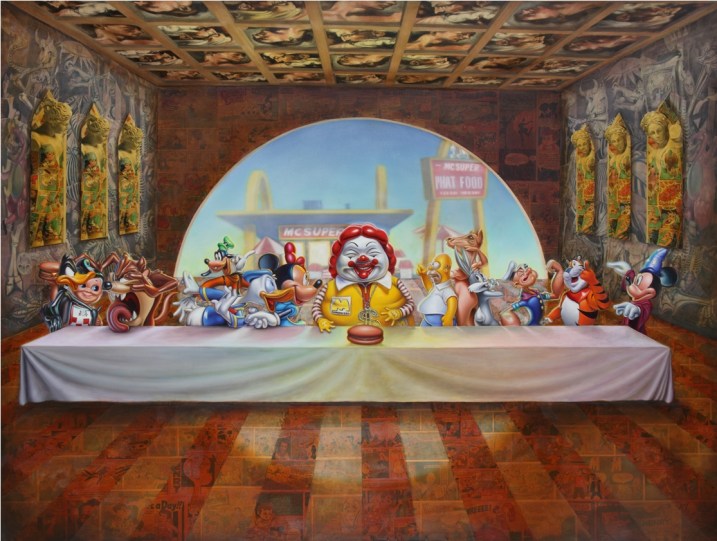 English represents childhood in relation to its usual settings. Mc Donald is one of the favorite places for American children. They are accustomed to associate it to positive reinforcements, like colored playgrounds, little Walt Disney’s freebie plush toys in the Happy Meals, foods full of sugar. And of course him, the clown Ronald McDonald. He’s more famous than Jesus for American children. Ron English shows children who looks like Baby Herman in Who Framed Roger Rabbit, driving little cars with the yellow M trademark. 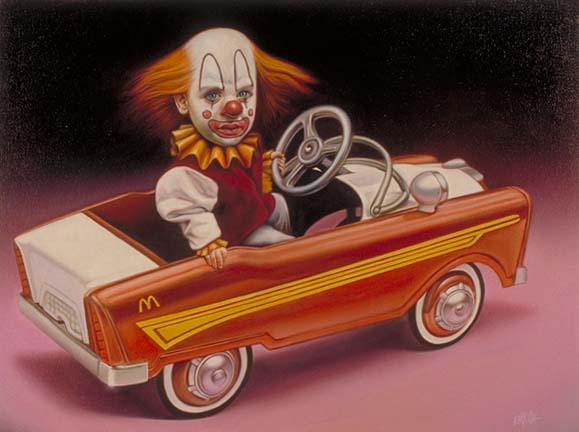 Nutrition is another symbolic system of which English investigate the semantics. 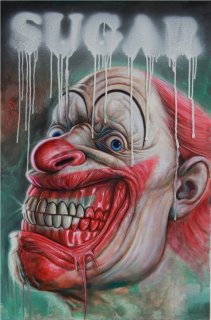 Overeating. Sickness. Aggressiveness. Longing for blood and sugar. Unnumbered  researches reveal how sugar makes the body weight and can cause an increase in  insulin resistance, and how it intoxicates blood vessels in the same way in which smoke intoxicates lungs. The consumption of huge doses of sugar stimulates receptors of the nervous system in a very similar way as drugs and nicotine. There is a release of serotonin, a calming and exhilarating effect. And there are also the sugar withdrawal symptoms, with anxiety, agitation, tremor. The food industry created the addiction to sugar, fats and hyper-caloric foods. Because consumption and sales multiply. 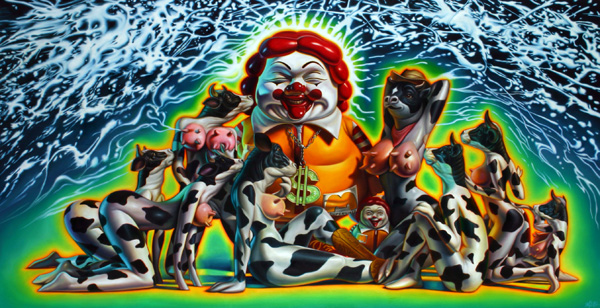 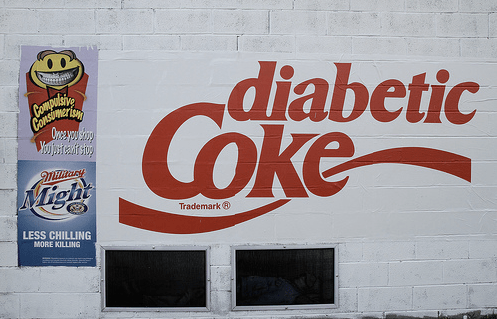 Ron English represents America and subsequentely its mirror, the West. Its death-soaked culture, devoted to self-destruction, which lobotomizes its children and makes of sickness, addiction and fabrication its basing counter-values. 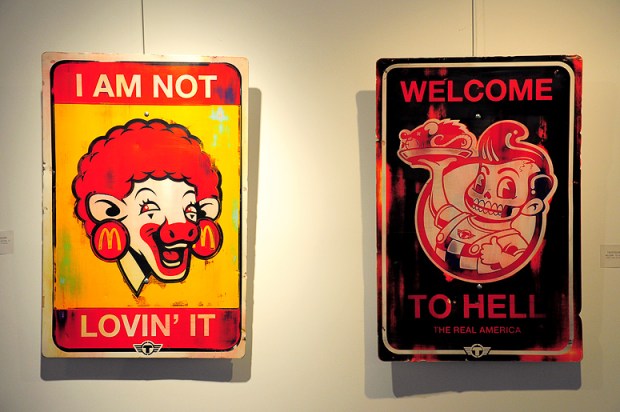 Because, as an old  member of the Labour Party said, sick, ignorant and unhappy people are more obedient, and less difficult to control. Ron English urges us to look carefully upon what we have on the end of our fork. To feel that frozen, invaluable moment of revelation. 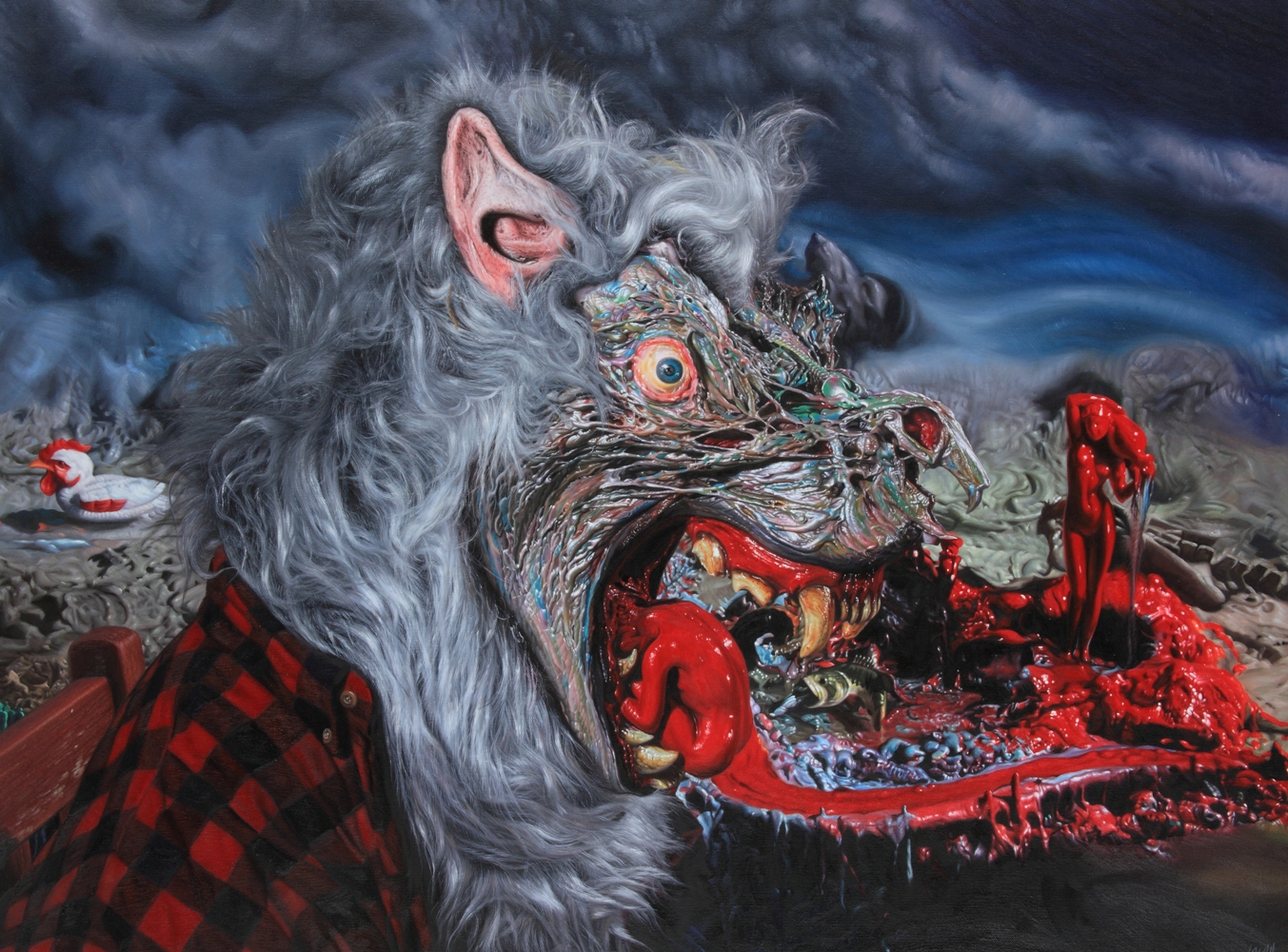 Published on the monthly column Final Destination, on Lobodilattice, august the first, 2011.