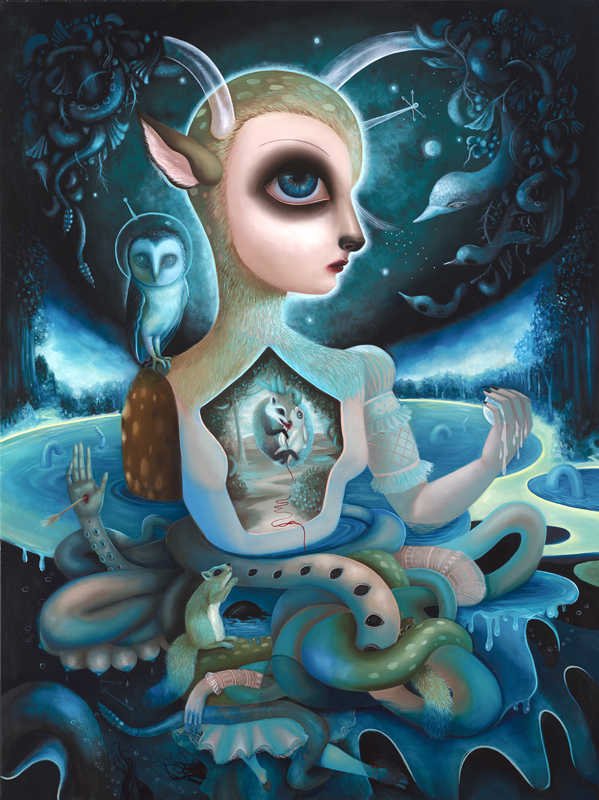 There will never be

I am Dionysus, generated by  Zeus,

and by  the daughter of Cadmus, Semele,

whose womb was melted by the flames of lightning. (…)

So I have come, and I have taken mortal semblance,

and I have change my shape in human shape.

You should have never gone to Hollywood

SYSTEM OF A DOWN

Deities with hybrid and severed body. Divine twins. Primordial waters and sacred animals. Beyond the stylistic and iconic elements of ecstasy and passion, the art of Jennybird Alcantara is deeply religious.  It is in the etymological acceptation of the word: re-ligare, to join together. But not in the communitarian sense, rather in a syncretistic one. We will find the hieratic quality of western altars, the totems of American Indians, the Great Mothers prior to civilization, the wood-divinities of the Druids and the furies of the obscure Dionysus. 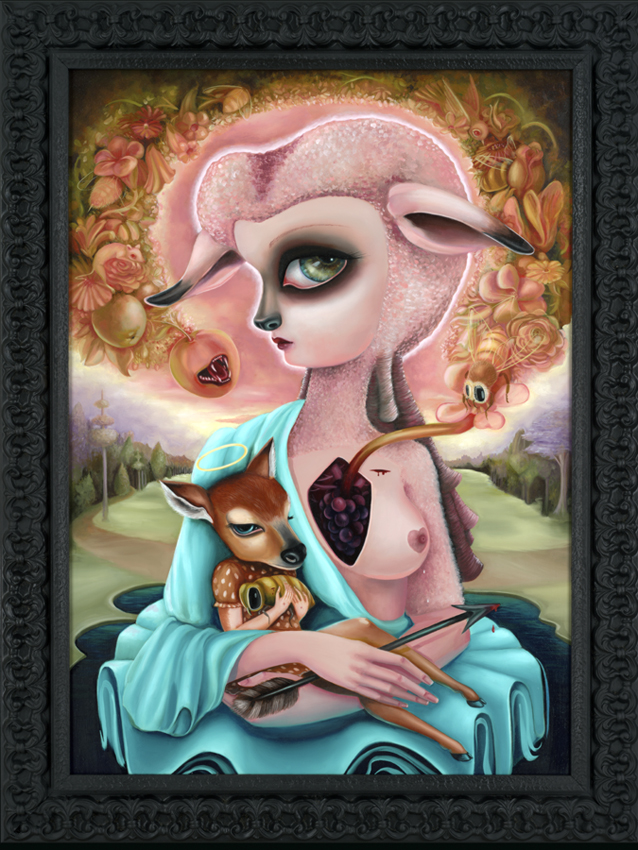 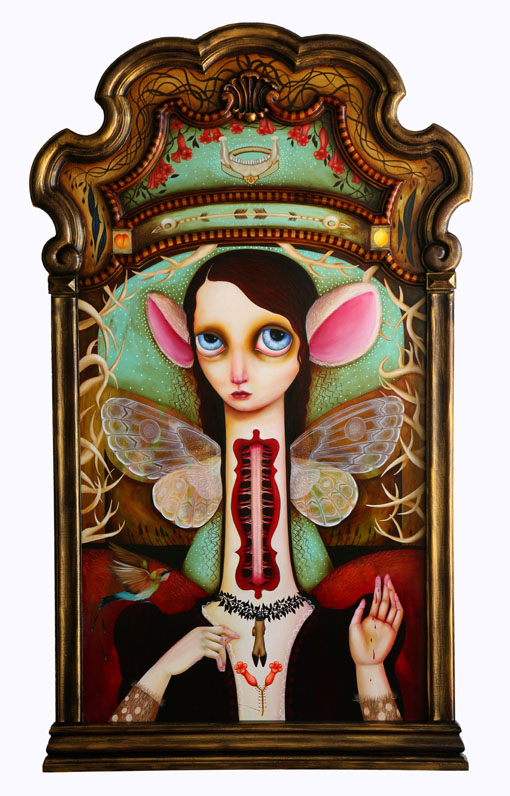 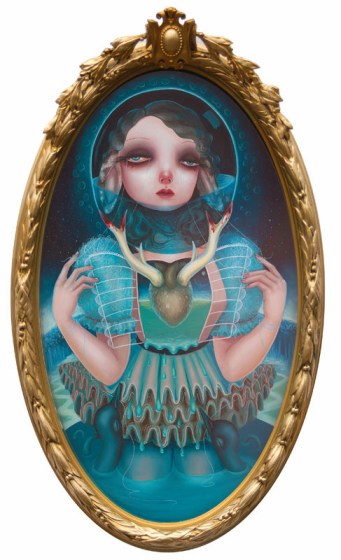 As usual, the fulcrum of the sacred is the body. Anisotropic bodies, with vertiginous lengths and bloodless rips. There can be beasts or infinite landscapes hidden in their breasts. 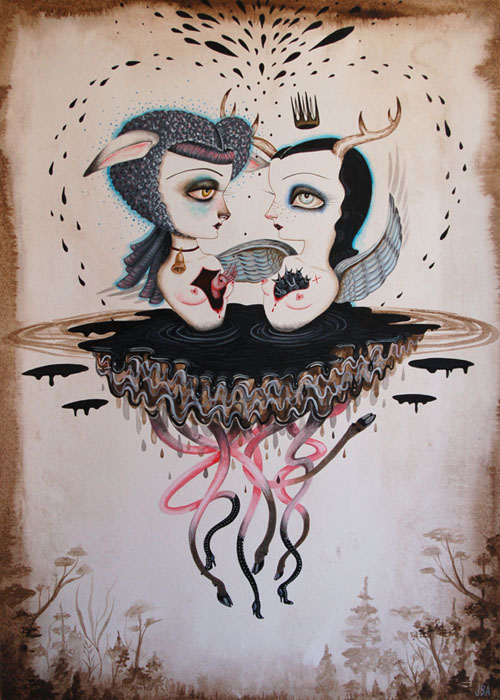 Their hearts branch in black hands, little skulls, or vein ducts interweaved with other hearts. The hearts can be hanged on deer horns, or be eaten by bears. They can contain ruminant mice, or the deathly embrace between a fox and a rabbit. 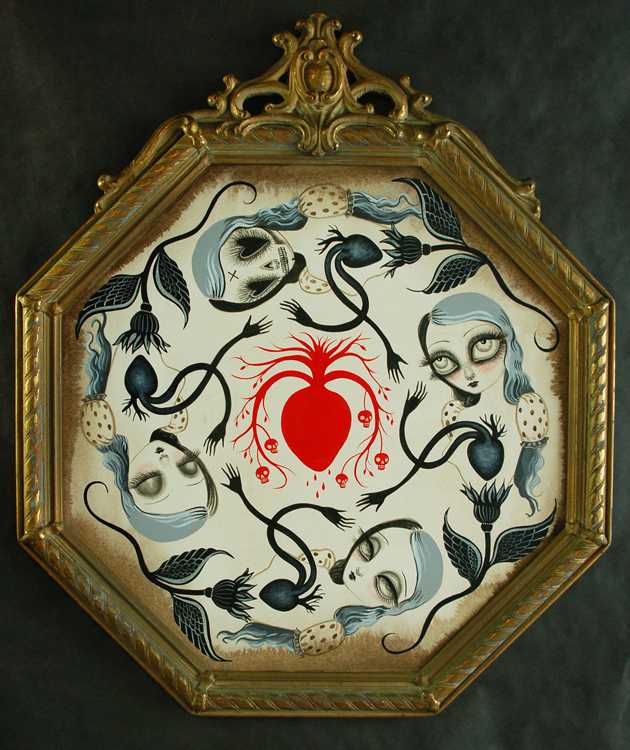 The black hands, pushing out the hearts, have the title of Healer. It seems to be the self-portrait of the artist, with sensitiveness turning into creative manual skill. 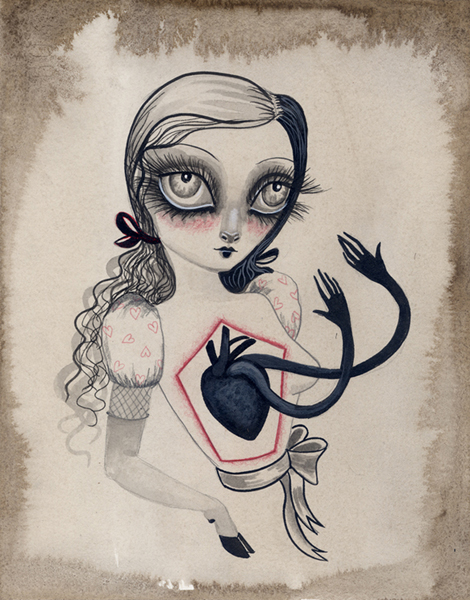 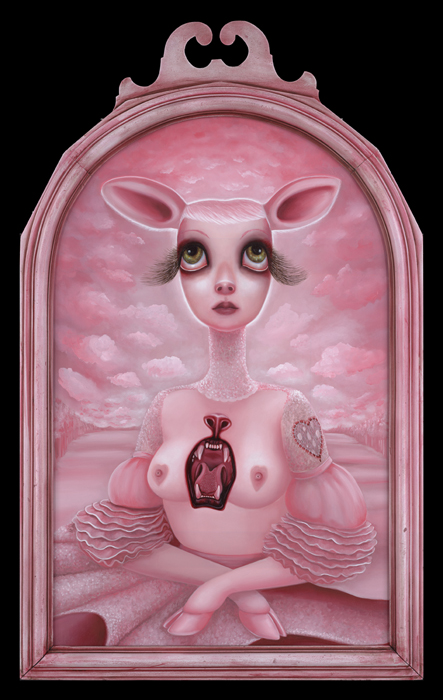 Eyes are another fundamental anatomic element: huge, languishing, often frontal even when the subject is turned sideways. There is even a single work dedicated to this organ,  which is connected with desire, and often considered a symbol of the genitals (Oedipus, Un Chien Andalou). 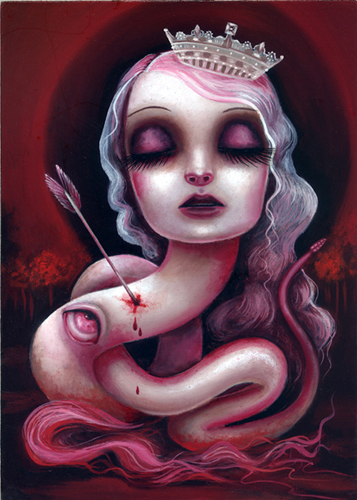 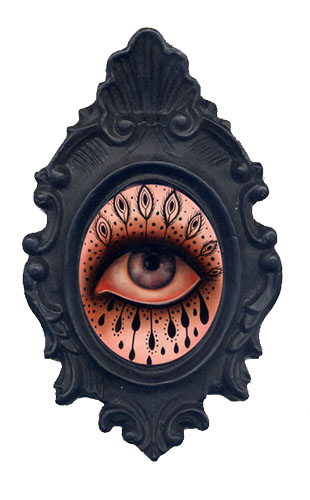 Then there are the ornaments: eyelashes like burlesque wings, Elizabethan ruffs, Victorian and Flemish laces. 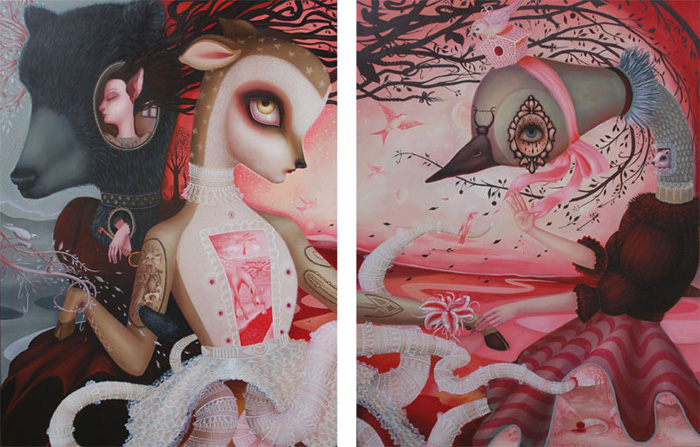 Jennybird Alcantara stages the opening of the body, the atrocity exhibition of its contents. 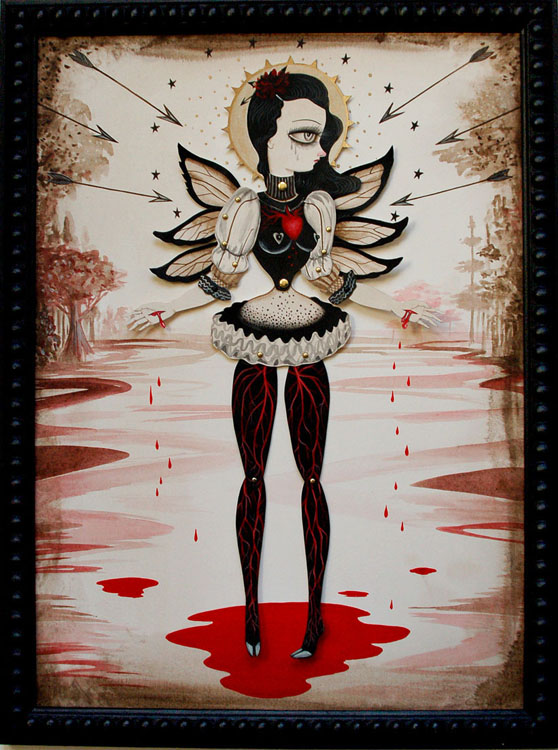 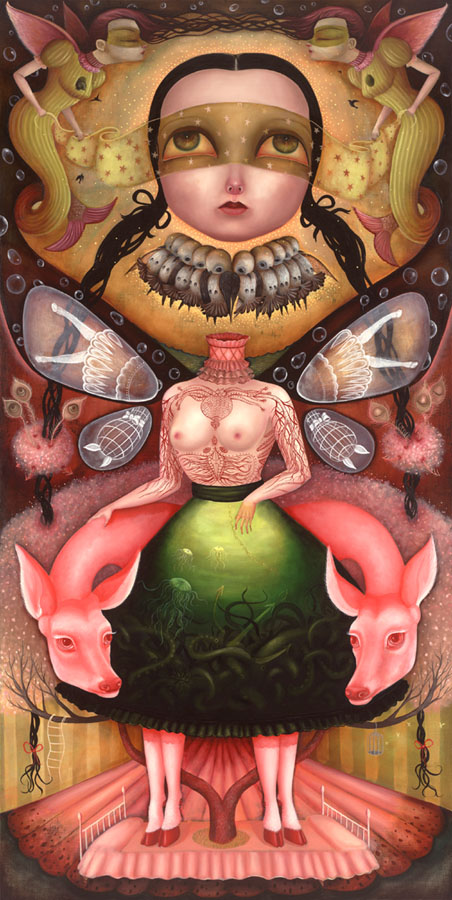 There are no men in this world, there is only the eternal feminine. This is the reason why Jennybird often represents aquatic divinities. Water is the source of life, very adaptable but also potentially destructive. Jennybird Alcantara practices the body’s division, separating the head from the torso, the torso from the legs and the arms, often using polyptych installations. 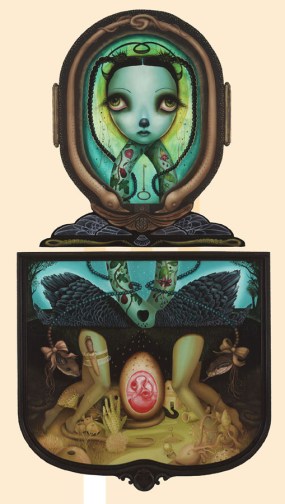 Limbs’ separation and dispersion constitute another religious myth, the myth of sparagmòs, suffered by Osiris, Orpheus and by the ones who came upon the bacchants possessed by Dionysus.

There is a person who allows us to actualize the myth of  sparagmòs in today’s immanent and secular Cult of Stars. 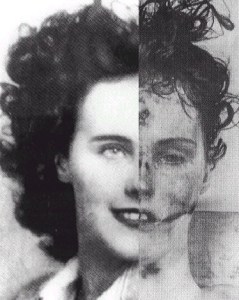 This person is the Black Dahlia. A porno-starlet from the extreme periphery of Hollywood in the Forties, her actual name was Elizabeth Short, and her nickname was due to her habit to always be dressed in black, and to her mop of dark hair. She wanted to be a star, in a confused and indefinite way, to become an actress, and she ended up to be a prostitute on Santa Monica Boulevard. Before getting twenty-three years old, Elizabeth Short was found in a Hollywood’s flower-bed, disassembled like a doll.  At one side there were the mangled trunk and the head, on which someone had carved an enormous and eternal smile. On the other side there were the broken legs. Her murderer had for sure a very good social position, in fact he was never found. Some eminent surgeons were trout out, along with Woodie Guthrie, Norman Chandler and Orson Welles. Alcantara dedicates a doll to the Black Dahlia, which can remain dismantled without any damage. As to save Elizabeth Short from the forty-eight hours of torture which came before her death. 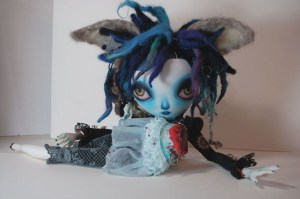 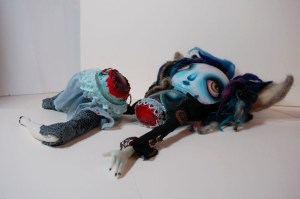 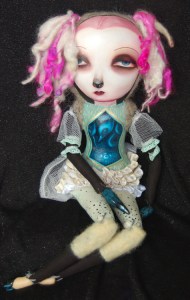 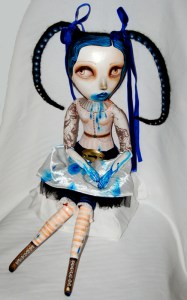 The doll-theme is so obsessive that Jennybird throws it outside the picture, adopting it as a new support. 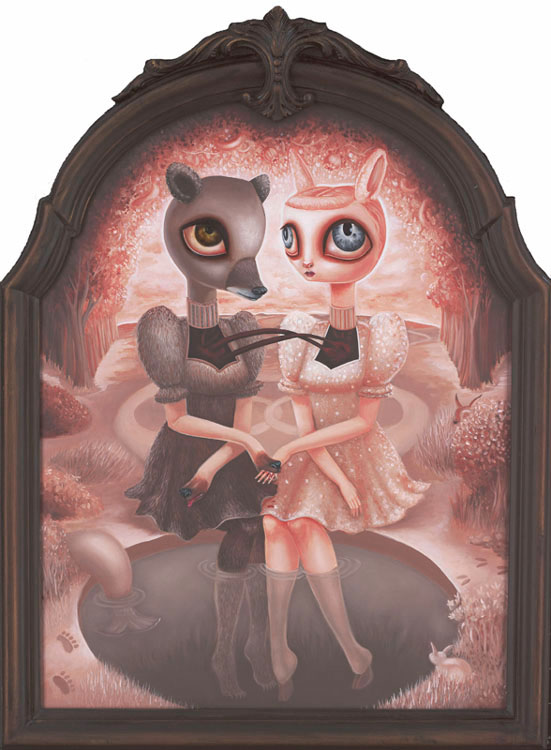 Beside the eccentric bodies of the dolls, there are also the freaks. The sideshows’ dead-ringers, composed like herms. Jennybird puts often on stage she-twins, one with features of predator, the other one as prey, with their hearts interweaved like they were different aspects of the same person. Sometimes the twinship is Siamese, and the sisters unite by the head, alluding to parasitism, community and symbiosis. 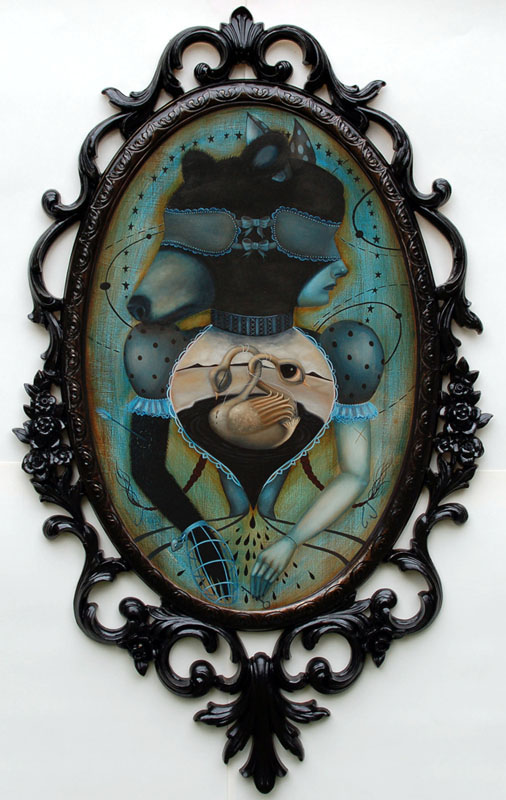 The other cardinal element in Jennybird’s poetics, together with the body, is the animal. Bears, wolves, bees and lambs. Swans, birds, aquatic creatures with tentacles. The animal and its faculties are central for the shaman. 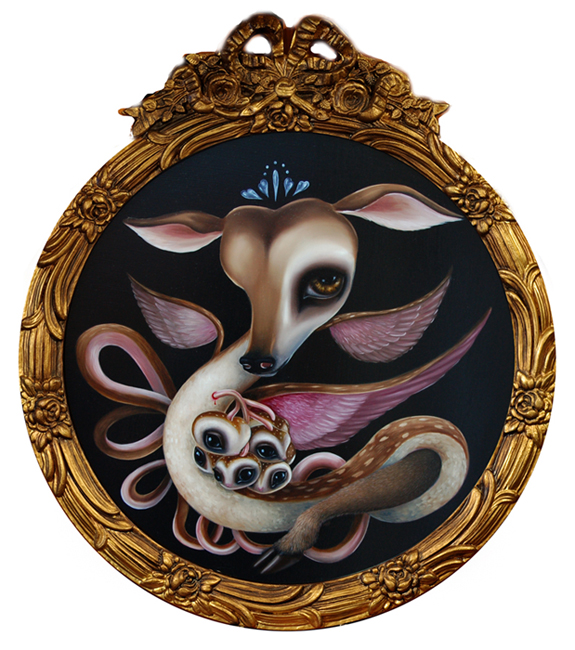 The shaman is the problem-solver of his community, and he has to possess intuition and wisdom, to understand what are the nodal points from which the future will be born, and how they can be modified. The guide spirits usually appears as animals, and their name, according to the Mesoamerican folk religion, is Nahuals. 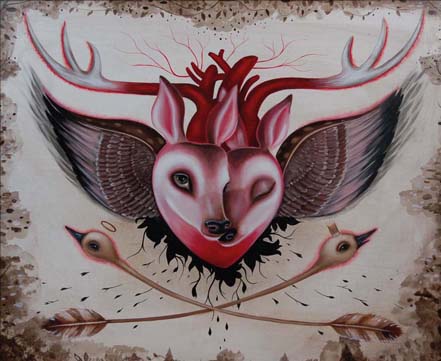 The awesome, visionary and powerful works of Jennybird Alcantara seem the answer given to the nahual’s call. 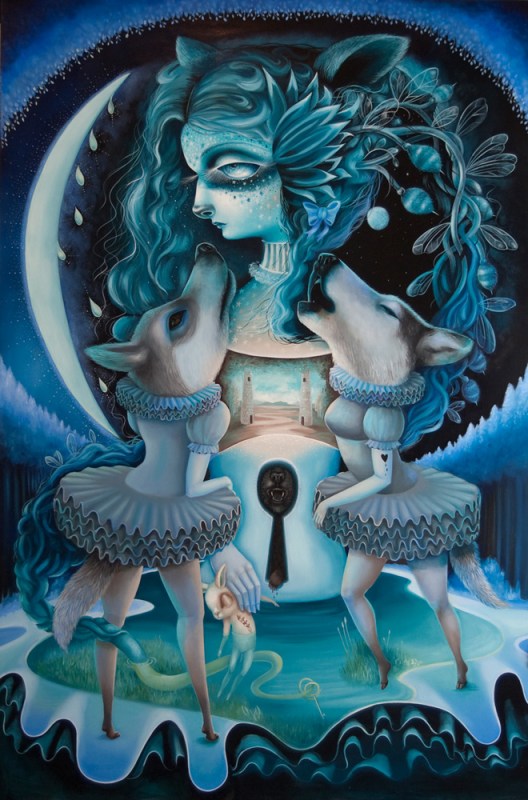 Published on Lobodilattice, for the monthly column Final Destination, the 20th of June 2011 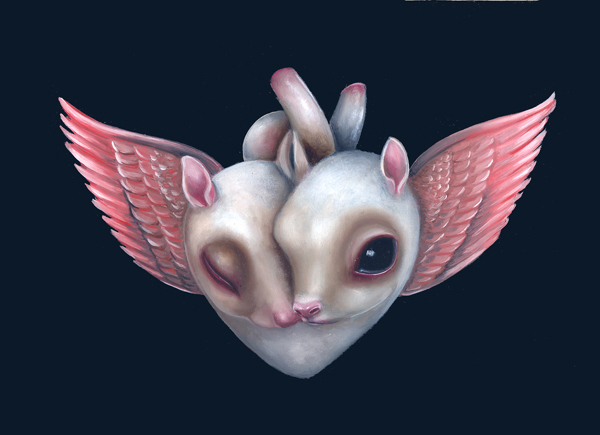