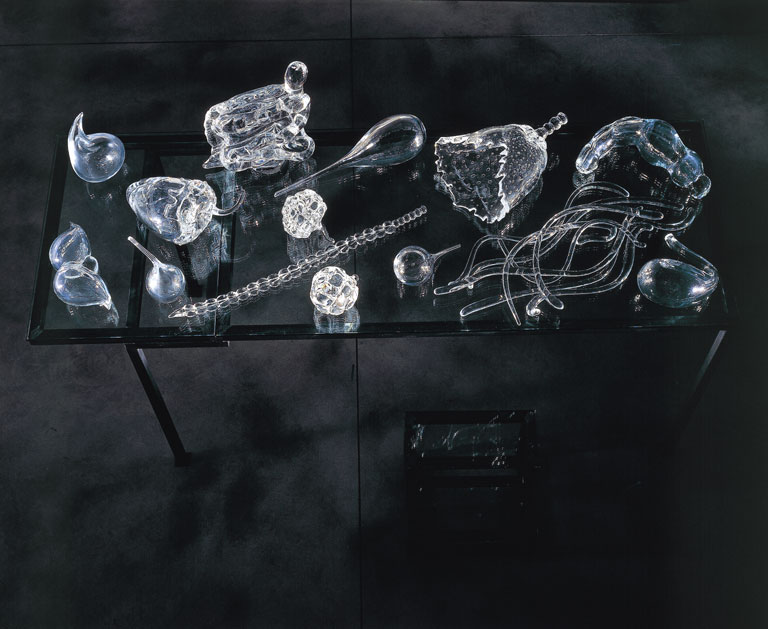 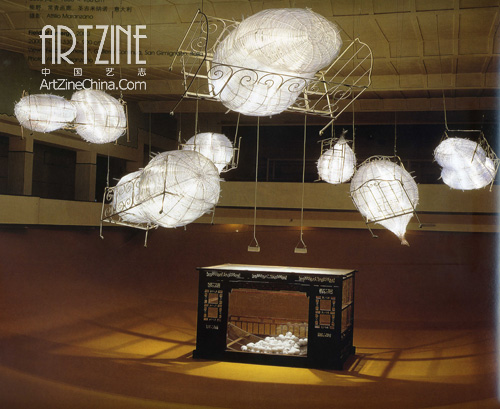 The antinomies of our logical system set darkness against light and soul against body, but if we refuse submitting to the automatism of the opposition, and we perform a dialectical couple-swing, we may see that light and body could function properly as ends of a binary structure. The body has an opaque texture, it is torpid and slow if compared to the world physical phenomena, it could be easily damaged, and can easily dissolve. It’s permanently collocated in a here-and-now dimension.

As opposed to it, light is the quicker physical agent that we know, it can travel without a conductor because of the electromagnetic nature of its waves, it is incorporeal and imperishable. Light is often used as metonymy of the Big Other in comparison to human finitude, God, which represents everything that man is not. Some think that light is the vibration of the omni-pervading cosmic ether, a very thin undulatory substance, the ideal model for every fluid.

Chinese philosophy also postulates the existence of a force which saturates the universe, in every scales of size. This force is named qi. For the human microcosm, qi is both wisdom and memory, but also functionality and strength of the body. Qi distinguishes the individual essences of living beings, but forms a universal energy continuum at the same time. 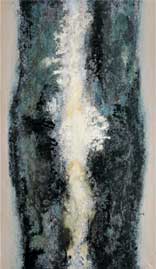 This cosmic force has been represented by Chen Zhen since the beginning of his artistic iter, in the abstract triptych Qi flottant. The qi concept could intersect the one of spirit. If we search in the body something so ethereal and essential, it could be the electric nervation which produces the voluntary and involuntary muscle moves and the information exchanges of the neuro-cortical system.

Therefore, electricity. Chen Zhen declared that artistic creation has its source in a mental event which could be compared to the electrical short-circuit. By the end of his life he produced some installations pervaded by an etheric, endogenous luminosity, coming from biomorphic masses. These works are bound together, for their morphology and evocative power, they are clearly inter-contextualized.

In Field of Synergy there are seven bulging cocoons, made of transparent plastic wires, woven as baskets, illuminated from the inside by a white-neon-like light. Their shapes are soft and somehow childlike, and their features remind us of the first stages of a foetus’ development, as the curvilinear structure of Cocon du vide. These cocoons are curbed into little beds of wrought iron, as if they were frozen in the instant of a whirling flight, hanging all around a central reliquary. Inside of it, there are numbered balls, which are set in motion by a fan whenever a viewer comes up. 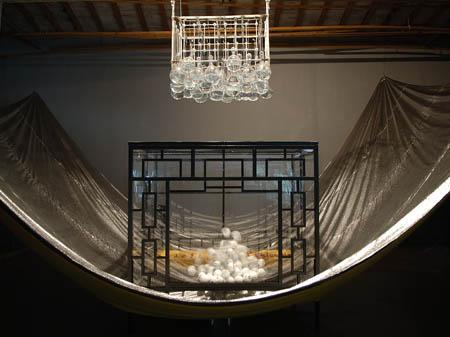 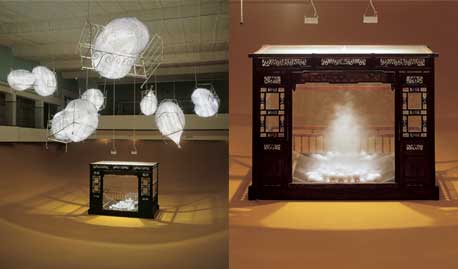 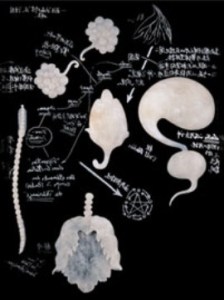 Everything seems to refer to declinations of dream and play, the alea of the number to draw, the flying whirl ylinx. The fact that the central reliquary is a Chinese double bed, the cocoon has a fragile conformation, and there is s sort of haze in the focal point of the installation, seems to suggest an antenatal stage in which everything is suspended and fluctuating, open to endless possibilities.

We find a similar stage setting in Meme lit, reves differentes: there is the Chinese bed, and a warm organic light springs from its base, maybe the same light we that could see from the inner perspective of the uterus. Two shiny wings of fabric rise on both sides. We can see a human outline inside the bed perimeter, with the meridi ans of Chinese medicine traced in it, and Qi circulates inside of them. There are three typologies of energy moving inside of these ducts: one comes from feeding, one from breathing, and the last one, the so-called ancestral, is fixed in the moment of conception. It is not by chance that the central bed is divided in two parts, one for men, and one for women. 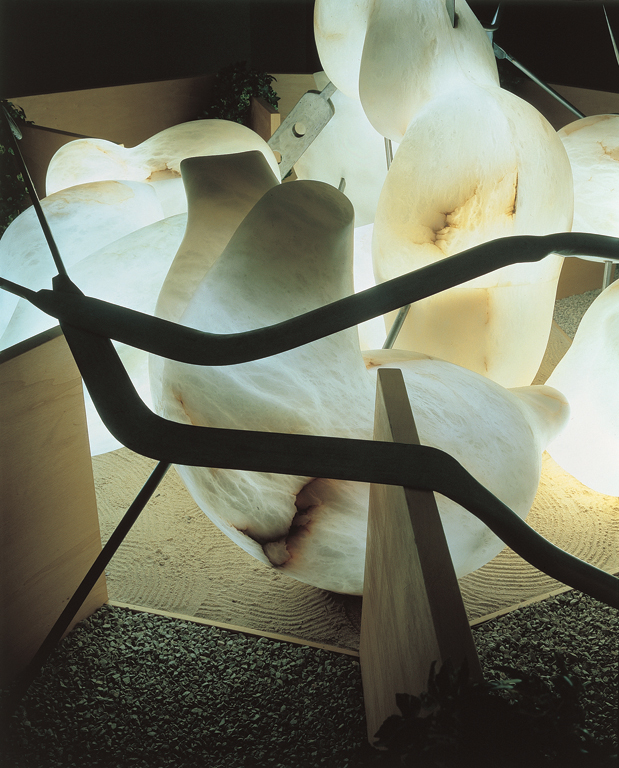 In Zen Garden we have a wooden enclosure (wood is one of the five oriental elements, with ground, water, metal and fire), and inside o f i t there are plants, sand, gravel, and big white cocoons, luminescent and sinuous. Their colour reminds us of the cerebral mass, and their shape, despite their soft nature, has something of a tormented and convulsive quality, due to the presence of threatening metallic tools. They are surgical instruments, scalpels, scissors, spanners, and they run through the cocoons. The cocoons’ phosphorescence has some bruised areas, where nets of broken vessels shine through, as to suggest something anomalous, a malfunction, a pathology1. 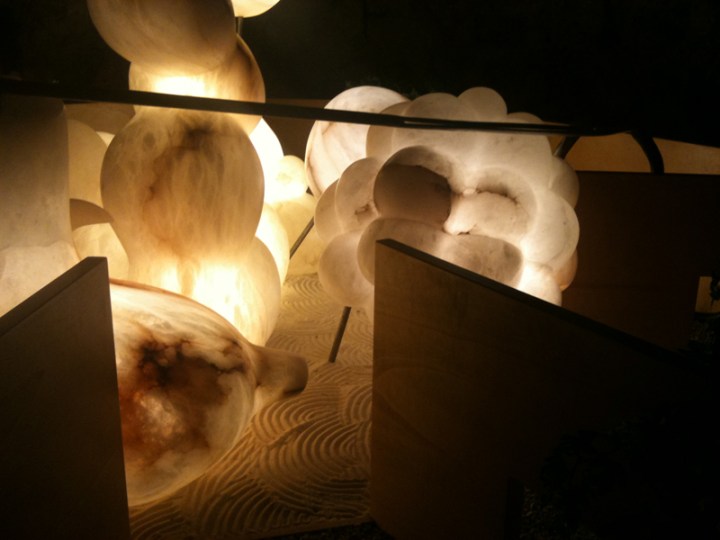 Chen Zhen said that Chinese love to proceed in roundabout ways, by allusions and metaphors, and that the use of an indirect language is a fluid ad powerful communicative strategy. He adopted this principle in his poetics. Excluding the very first allegorical drawings of the early Eighties, Chen Zhen has never represented the body directly, but always in transversal ways. The embryonic masses of the mentioned works refer to the body, to its infinite and shining faculties, and to its suffering. When he was twenty-five, 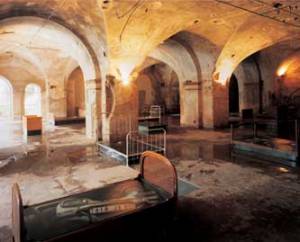 he found himself affected by a blood disease, some say leukaemia, some autoimmune hemolytic anaemia. He died in 2000. He has always been reticent about his condition, revealing it publicly only by the end of his life. But in his work there are indications, clues, traces, apocryphal codes of pain.

Jardin lavoir was displayed in a wide location, with veil vaults, and it was composed by a set of hospital beds without mattress. There are clothes, bottles and glasses, books, electrical elements in the beds basements. These objects seems to be underglass, but they are actually immersed in water. The seriality of hospital system annihilates man, it turns him into a bed, a number, confining him in a cramped space, just like in a fish-ball. The human being, reduced to a semi-vegetative state, can only cling to his companion-objects, and wait the chemical compounds to wash away his ache. 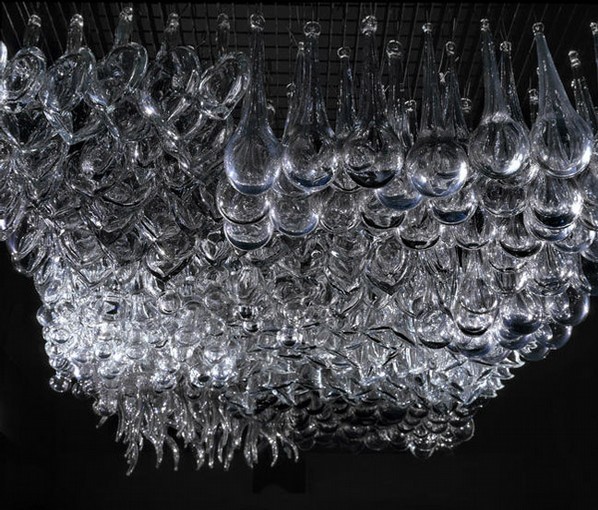 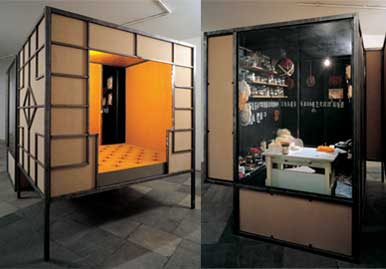 The body of pain is implied also in the installation Obsession for longevity, made of two Chinese tester beds, grafted one to the other, demarcating two adjacent spaces. One is the room of hope, full of shelves and pots containing medicinal powders. In the other one, there is a mattress full of nails, which tells us about immobility, bed-ridding, and a pain which nails and tears you apart. 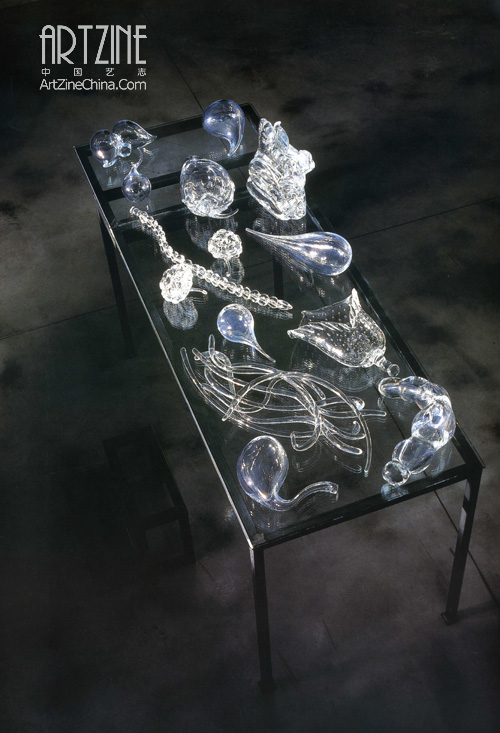 The diagnostic table also appears in Crystal Landscape of Inner body, but what is displayed on it is of a completely different order of beauty. Human viscera made of crystal, organs delivered from flesh, turned into pure light. They shine as fluorescent jellyfishes, as the first dazzle of life in the darkness of the primordial mists. They look like precious stones. Light outlines their shapes and their volumes, and reflects from one to another in iridescent particles. Chen Zhen seems to adopt the Taoist maxim which says that “the wise man puts his body outside and preserves the body.” This organic topography reflects the principle of the Chinese medicine according to which to every organ corresponds an orbit of energy, and the material used confirms how breakable is this balance. 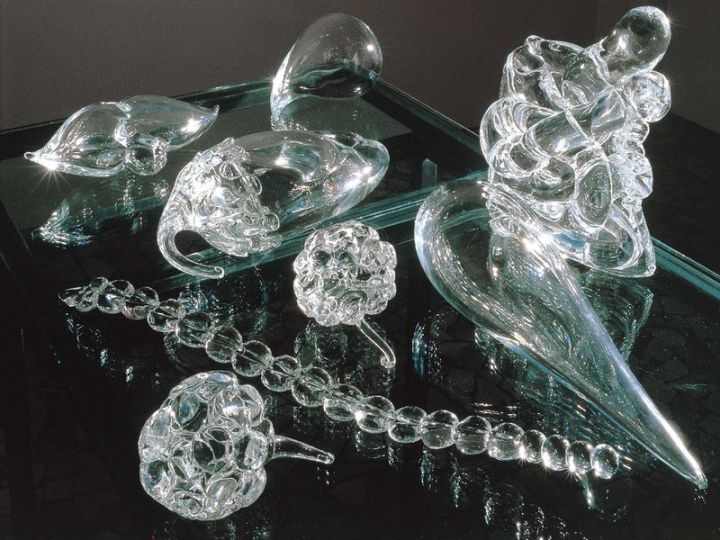 Glass globes –connected to the transparent viscera of Crystal Landscape of Inner Body for their shape and material–, float in the upper side of Le lumiére interièur du corps humain. Their ascensional motion seems to prefigure the instant of death, in which the body, delivered from flesh heaviness, will become a virtuous unity, a body of light, a body without organs.

Death is represented also in two works of 1992. 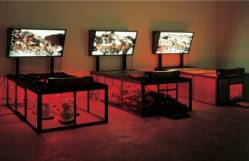 In La voix du sommeil – Sleeping tao there are three funerary beds, three glass reliquaries full of debris. They are illuminated by a reddish light coming out from three light-boxes, transmitting images of the same debris. Three, like the parts in which soul splits after death according to Confucianism: one stays by the grave, one flies to celestial regions, and the last one binds to the batten which represents the dead in the domestic temple for the cult of the ancestors. 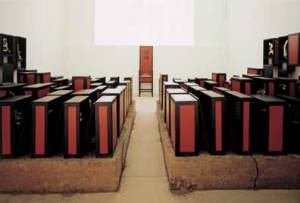 A mass of cinerary urns appears in Le retour de fantomes de l’homme: Find reincarnation in another corpse. Inside of these oblong boxes there are mechanical gears, in double copy: one real, new, isolated and perfect, one photographed rusty and integrate in engine. This installation seems to allude to a mechanized, wear down body, efficient only if divided, a body which can not be one, and which is going towards the most horrible of the possible post mortem fates, to remain imprisoned into a corpse.

According to Taoism death can be defeated through contemplation and ecstasy, and Chen Zhen, covering the distance that led him from these fearful installations to the bodies of light of his last works, seems to have make for that place. Because ecstasy means getting out of the body, and going beyond the most insurmountable limit for human beings, their own flesh. Chen Zhen, with the organic ecstasy of Crystal Landscape of Inner Body has pushed the basic concept of his poetics, transexperience2, to its extreme limit, transcendence. 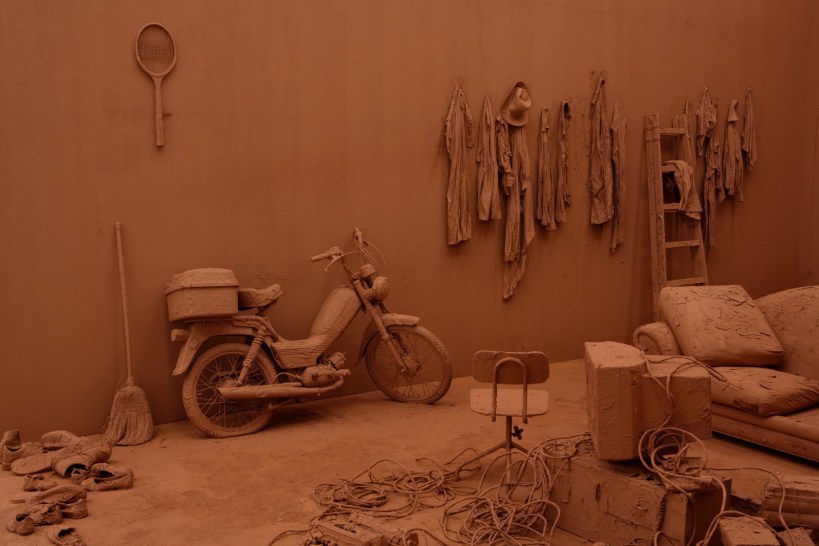 The article was published  November the first, 2008 on Succo Acido

1 In the preparatory study for Zen Garden we can see that the cocoons are actually human organs, and the space of the garden is the body -temple, going through various transformation stages. There is also the pentacle of Chinese medicine, in which a couple of organs is related to each element.

2 Transexperience is a sort of experimental wisdom, which can be gained from the subject only if he leaves the protective cocoon of his own culture and lives in constant movement. It follows that the constant exchange with the Other builds a fluid, strong and magnetic identity, in which all experience-fragmentations merge into an “inter-linkage holistic mastery of the different periods and different happenings in a life characterized by overlapping moving activities.” In this way a global mind is born, and a free, aerial way of thinking, without binding categories and structural weights.